So I did manage a little work before this month before the holiday but not much since my return for 2 reasons. I have been sick with the flu and I have spent some time cleaning up. I will start to have help on the boat and I am a bit embarrassed about the state I have let the shed get in so I have decided I will have it as clean as I can get it before the guys start work. I have barely tidied up in over a year and would say that I have really only tidied a few times since we moved to this shed, so it is not surprising that I have accumulated enough mess to take a few days to clear. The biggest issue is getting dust off everything. I have also kept a ridiculous amount of off-cuts, thinking there is no point throwing it out until I am finished because you never know what you might use, but I have so much really small off-cuts now that I have to just throw most of it out.

What I did before I left was to create a template for the bathroom wall out of 3mm mdf and then create the bulkhead that will be the bathroom wall. I glued and glassed 2 pieces of the 25mm polycore as I did with the starboard hull bedroom wall. The bathroom wall is going to run square to the hull centreline so the panel is not quite as big as the one in the starboard hull. But to join the 2 pieces I used the same method of decoring the edge and using a strip of plywood to form a tongue to bond the panels from the inside and glass tape bonding them on the outside. I ran the join vertically this time instead of the horizontal join I used on the starboard side because this time I dont have cupboards hiding a lot of the join and also because of the size off-cut I had to join meant it was too small to join along the long join and had to join along the shorter join of the panel end. 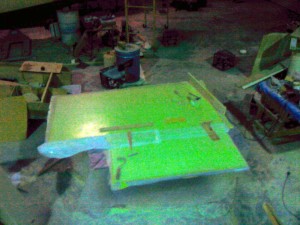 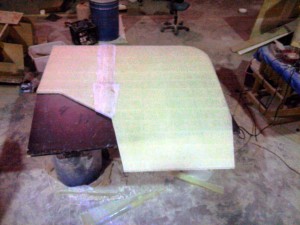 With the panel cut to shape the next step was to dry fit it and trim to exact size. I usually allow a few millimetres over when cutting because it is much easier to trim them back than to be too small and have to fill the gaps when coving and glassing the panel in (as was the case when I made the starboard panel but that side was made more complicated by the angle the panel was fit at). As it turned out, the panel was exactly oversize by the few millimetres I deliberately left on. You would think this to be annoying but it isn’t. It is both gratifying that I had made it or could have made it exactly to size and once trimmed more gratifying to know it fits exactly. An exact fit helps on 2 fronts, first it is tight enough to stay exactly in place by the friction of the fit, and secondly not too tight that it causes the panel to buckle to fit, which would need to be faired out.

This is as far as I got before the holidays, the rest of the work I have completed since getting back. I marked the position of the bathroom door on the panel. A simple process because like the other doors in this hull (except the front walk in wardrobe door) is not only the same size and shape but centred on the hull centre line. With it marked I removed the panel to cut out the door.

Next step was to de-core the edge and back fill with uni rope. My usual method was employed. De-core using the die grinder. Drill screws through the panel about 150mm from the door edge. Prepare 3mm mdf strips with cellotape to ensure the resin cannot stick to it. Wet out an appropriate length and width (3.6 meters x 400mm) piece of uni and roll it into a rope. Apply the rope to the de-cored edge and start covering the rope filled edges by running an elastic band from one side of the screw over the mdf pulling it down to the edge forming a square flat surface for the excess resin to set to and over to the other side of the screw, then move on a to the next. A little at a time until the entire doorway is filled and covered. The entire process including edge de-coring takes about 3 hours. 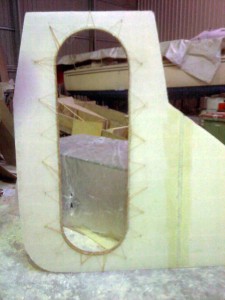 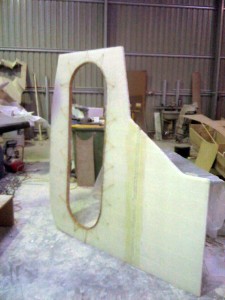 Once set, remove the elastic bands, because of the resin on your hands when applying them, they become useless and cannot be re-used, but they are very cheap. A bag of 500 is under $5. Then remove the mdf to reveal the edge. Here and there you will need to trim excess uni or resin and take off the sharp edges. I also had a couple of bulges here and there that I sanded back down, you have to sand through the top skin to get this done but it must be done. Unfortunately with the core removed the glass skin left is flexible and here and there if you dont pull the rope tightly enough as you lay it, it bunches and bulges the edge glass out a little. No big deal. Still super strong. My edges will also be covered with door trims, in fact, Fergo will make them for me in a mould and he told me that with the door trims I didnt really need to uni rope fill the edges, so strong are the one piece door trims, but as I had already done most of the doors and because I actually find uni backfilling easier than compound backfilling and because I have so much uni left I decided I would use this method just for consistency.

The refitting of the panel with the door cut out of it was easy, it was already the correct size but having the uni in the door made the panel quite stiff (more stiff as the panel is no longer flexible because of the uni in the door) and having the door meant I did not have to climb up and around it to fit it either side. With the bathroom wall and door in the room sizes are starting to reveal themselves. The bathroom is quite large by usual cat standards. With the shower the other side of the main bulkhead this room only has the toilet and a hand basin in it. The shower will also be huge, perfect for saving water and showering together.

I have managed a couple of limited days of clean up. I am not 100% well yet, still coughing and spluttering and feeling generally crappy, so I have used this as an excuse to slack off. Not much to show for the time but the combination of not cleaning for so long and not being well has made it a big job, that I am working very slowly toward finishing. I wish there was more to show for the time this month but there isnt so I had better make it up next month.