Back on the big boat

Happy Australia day to all the Australian readers and to those overseas, well you can always migrate to the greatest country on earth. This morning Jo and I went for our morning walk to Gosford Marina and visited Warren on his cat. He invited us to spend some of the Australia Day celebrations aboard his cat. That consisted of a sail past regatta and water bombing other boats in the bay, then Warren was able to raise his huge ex Australia 2 Americas Cup spinnaker with the boxing kangaroo on it (I hope to have a photo soon), which was a highlight. Then after watching some of the raft races and other fun we left Warren and his other guests on board who were going to sail the bay the rest of the afternoon because after spending the morning on someone else’s boat I wanted to get on with mine. The sooner I finish the sooner we are on the water on days like today.

So I returned to building MM today. I glassed the inside of the top half of the beam. Because the planks were spaced a little less tightly than the bottom I had glue oozing between the planks and set hard which I had to sand down before I could glass. I did this and then prepared to glass. I still had an uneven surface with some planks a little higher than others so rather than keep sanding the rounded area I decided it would be better to smooth it out with filler. I decided it would be better to use glue rather than filler for strength and settled on a mix with both microspheres and microfibres in it. The strength of glue with the viscosity and consistency of filler. I was pleased with the mix.

My method was to apply the filling mixture to about 2 meters of beam, then wet out the uni glass to just before the end of the mix, then fill 2 more meters then roll out another 2 meters of uni glass and wet it out. I continued with this until I completed the uni wet out, then applied the double bias and wet it out rolling out a couple of meters at a time and sqeegeeing the excess resin as I went. 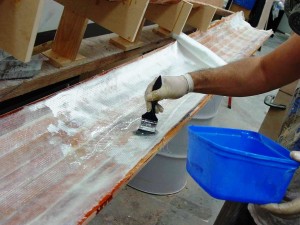 The first layer of uni glass took about 40 minutes to wet out, the combination of filling and wetting out taking a little longer. 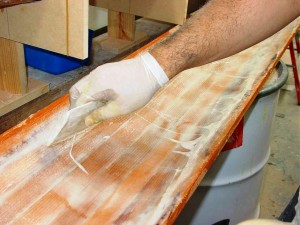 The second layer of double bias glass took about half the time of the uni, so about 20 minutes to apply. Add to that about an hour of preparation, and it took about 2 hours to glass the inside of the beam top. Tomorrow I will start around 9 am and hope to get the ply web coved and glassed in by about noon, when Warren and I will return to the dingy project. Then on Sunday, I may be able to glue the 2 beam halves together.