I got back to working on the boat today. I filled the joins between the deck panels between bulkhead 0 and 1 so that I can cove and tape the inside of the joins tomorrow before adding the next pair of panels. These 2 panels, once added will make the space at the bow too narrow to reach into to do this tape later. I have to figure out a way to tape the port hull now that it is turned over and it is a very narrow space and a long way down. I also plan to fill the next panel joins and taping inside before attaching the final panels. It seems easier to do it this way and I wish I had done it this way on the Port hull.

I used the same method as last time to apply the filler/glue. First I masked the inside of the join so that the filler would not be able to drip out. I then made up the mixture of resin/hardener and 411 microspheres and scooped it into a zip lock bag and then sealed it before cutting one of the corners off making a piping bag. I then slightly over filled each join. Last time I way over filled each join and smeared it all over the place only to have to sand it all off again. This time I just beaded the fill a bit higher so that I could still sand it down to a sharp line flush with each panel face angle before rounding it off again.

I have also glassed the inside of the next panel on the outboard side of the hull ready to attach tomorrow after I tape the bow panel joins. 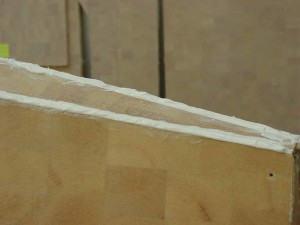 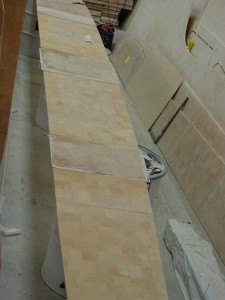 I also decided that I would check on the Pure Seal test panel today. It was a beautiful warm sunny day more like summer than spring and 26 degrees, so winter is definitely over. I started the test just into winter (by 2 weeks) and decided I will test the panel at the start of each new season. Click here to see what the panel looked like at the start of the test.

Pure seals promise is that nothing will get a grip on its surface and therefore is a good long term, low maintenance antifoul. I have had the sample plate hanging under our pier for 3 months. You can see in the first picture that it appears that some growth has occurred. At first I was disappointed. But there is no repellent or poison in the substance so there is nothing to ward growth off, what they claim is that nothing will stick to it. And sure enough, the growth there is has the most tenuous of holds. With just a light rub with just my finger up and down the plate no more that 4 or 5 times the algae and other growth simply wipes away. This panel has had no motion except that caused by the tidal flow. I am not sure if the movement of a hull through water at speed would be enough to remove this growth but even if it didn’t, I don’t think I would be too concerned with having to take a dive and giving the boat a light rub every 3 months and never having to slip the boat and removing foul in the usual way.

To me that would be low maintenance however it may not even be necessary on a 3 month basis. I only removed the growth from half of one side in order to see the effect of 6 months growth and 9 months on the other side and then 12 months. If the surface remains this slippery after 12 months and the growth just rubs off in the same way I will be pretty much convinced. The only test then would be to see if the stuff stays on and remains as effective over say 3 or 4 years. It will be that long until launch so I have the time to wait and see. But so far I am very impressed.