Back from Holidays to near disaster.

We had a fantastic week off at the snow, our best snow holiday yet and Jo loved it, and snow boarded the best she has ever gone even attempting some jumps and rails in the terrain park. I spent most of the week in the terrain park doing jumps too, it was great fun.

We got back on Wednesday and on Thursday I went to the shed to get back into the build to find that we had narrowly averted a disaster, and by luck not good planning. I had a mishap a few weeks ago in that I needed to change resin drums and in the process spilt a half full hardener drum and lost about a quarter of it, or about 3 or 4 litres of a 20 litre drum.

When I got back on Thursday I found the top rim of the resin drum full of hardener and the rest of what was in the hardener drum on the floor. It was about half full, so about 10 litres had dripped slowly out of the tap on onto the lid of the resin and over the lip and onto the floor. It was bad enough losing the rest of the hardener but the near disaster was that it could have all spilt into the resin drum. Fortunately I had a rag around the opening to stop dust getting in and this stopped the hardener from getting in enough for the path of least resistance to be over the lip of the drum and onto the ground.

Even so a small amount got in and hardened on the top of the resin like the top of a frozen lake, but whilst the vast majority of the resin is ok, it could have been a lot worse. In fact so much hardener could have got in as to cause it to heat up so much it could have caught fire. When my mind registered that the pool of liquid on top of the resin was hardener my heart skipped a beat. I carefully cleaned the hardener pool off the top ensuring no more got into the opening into the resin before figuring a safer way to rig the set up so that it cant happen again. You can see from the picture below that the drum kept leaking until it was empty leaving only what ended up below the tap in the drum, straight down onto the blue resin drum, this is after I had cleaned up, before hand the entire lip was full of hardener and on the floor below was a pool of hardener. 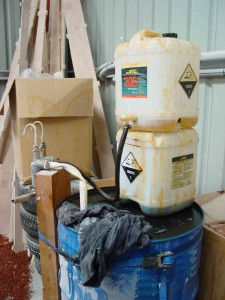 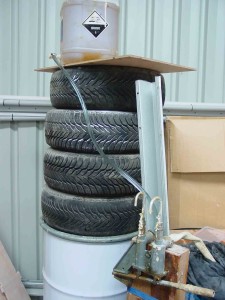 It turns out that when I dropped the hardener a small tear occurred in the hose down to the pump just below the tap and this is where the resin leaked from over the course of the week and as the hardener was directly above the resin it ran down the hose and then dripped off and pooled in the top of the 200lt resin drum as described above.

To ensure this can never happen again I have moved the hardener to the side and ensured that if any leak occurs it can no longer get anywhere near the resin. I have never had to close the tap on the hardener drum in the past but I will in future. The hardener pump is gravity fed so the drum has to be above the pump but the resin is suction pumped through the pump head. So the lesson here is use the stop cock, its much safer. I was lucky, it could have been much much worse.

I was speaking to James (the boat builder) about it as I thought I would need to replace the resin but he said it will be fine but if I had been using polyester instead of epoxy I would have lost the lot as even the smallest amount of hardener will eventually harden the whole drum, whilst with epoxy only a small amount of resin will be effected, but as the usual mix is 5:1 five times as much resin as the amount of hardener that got in will be effected. I figured most of the 10 litres of hardener was in the lip or on the floor but say a litre got into the resin then I guess about 5 litres of the 200 litre drum or about 2.5%. And seeing as I finished the first drum without incident, I have lost about 1.25% of the total resin allocated for the build and I was told that there is a 10% allowance for loss, so I think I will be ok and still have enough to finish. I may need more hardener as I have now lost about 15 litres or about 18%. 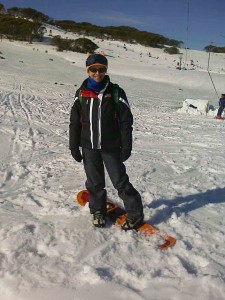