An Hour is Better Than Nothing

I could only throw an hour at it today. I managed to get the first sheave box glued into the first dagger and to sand and grind the rough dags off the second dagger where the tapes ended around the axle screws and glassed patches over the areas so now when it is set I can finish fairing this second dagger. I also hit the trailing edge with a grinder to clean it up and square it off.

As with a lot of things on a cat there are 2 , and as with most things I have made pairs of I have done a better job on the second and so it is with the daggers. That is not to say I am unhappy with the first, I can just see already how much better the second one is. I believe (famous last words) that as a result the fairing should be faster and easier. 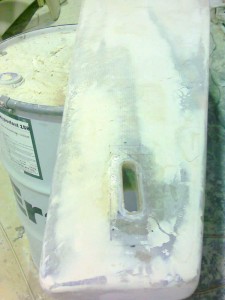 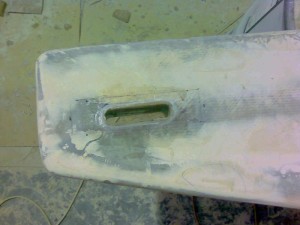 The first dagger has the top sheave box glued in, after trimming it to size, that is about 3mm overhanging either side. This will be trimmed back to flush once the glue sets with a sanding grinder. I made a cove of glue with my finger against the box side to be sure of a nice glue seal all around on both sides. When sanded flush it should be a very neat finish.

I also checked on the starboard keelsons, again second time around much better job, these are ready to cove and glass anytime I am ready, the other side will need a little cleaning up, just sand paper in my hand just to take some glue dags off before also coving and glassing. I hope to get both sides done this coming weekend so the bows are ready for the forebeam and to be closed in. Of course I still have to trim the beam to size and cut the bulkhead slots before I can fit it.