All Hatches cut in

Every job on the boat needs to be done sooner or later if the boat is to be finished. But as we ran out of money some time ago, many jobs and installations (purchases) will have to wait for better days. In the meantime I will install the wherewithal that will allow me to retrofit, such as I have installed salt water take in and run power and plumbing for a watermaker but know that this is a luxury I can not afford for some time after launch.

One such job is portlights and hatches. I will post a separate blog post on the ports, and the 4 turret hatches have already been done, which left 4 deck hatches and 3 in the hulls. 2 of the 3 in the hulls are 20″ round escape hatches in the chamfer panels and one is a 10″ hatch in the forward ensuite opening under the trampoline on the starboard inside hull. First I did the 4 deck hatches. I didnt want large deck hatches so went with 10″ round hatches. I had considered round hatches all over the boat, but they just didnt work in the forward turret so I ended up with square there, and rectangle on the cabin roof. 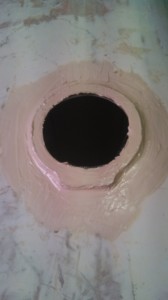 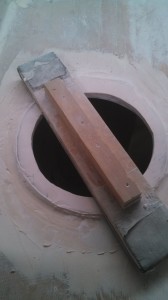 I originally wasn’t going to have deck hatches in anywhere other than the 2 bathrooms, but because I like the boat to look symmetrical I decided to fit hatches in the opposite hulls in the same position. Meaning I have a hatch over what will be the walk in wardrobe, not of much use, maybe it will help keep the clothing aired and help to find things in there because of the light, and maybe it will even help keep the hull cool by allowing air to flow in through that hatch and out through the hatch in the bathroom down the hull, provided of course the doors are all open. More likely is that the ports will be open and the air would flow out again through them. Anyway, that is where the corresponding hatch position falls, so be it. And opposite the main bathroom in the other hull is the dressing room between the main bulkhead that separates the aft starboard bedroom and the angled wall that closes off that entire room. A good place for another hatch. That aft bedroom will end up with the hatch and 2 ports, one in the outside hull wall and one on the inside wall that opens into the cockpit in one of the seat upright walls.

The forward deck area where the ensuite (and wardrobe in the other hull) will be fitted is very curved. It is strip planked area that curves down to the trampolines and even though the hatch is on the flattest area it still curves away under the hatch, so I had no choice but to fit flat ply pads and fill under the pad with glue to create a flat mounting surface for the hatch. I was reluctant to fit ply pads because the hatches are low profile so mounting them higher than the deck on pads kind of defeats the purpose of the design of them. Nevertheless as with the ones in the cabin roof I had no choice. And for the sake of symmetry I also mounted the ones in the aft of the hulls on pads to maintain the same look. Which means that the only hatches not raised off the surface on pads are the main bedroom hatches and I am now tempted to raise them. I probably wont, because they are in a different plane, and form part of the wrap around look, so maybe raising them wont work. But I digress. 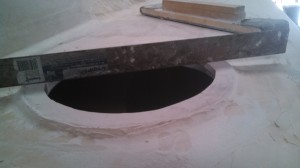 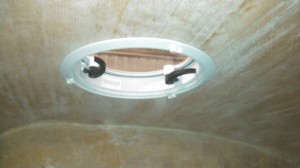 I made the ply pads the same shape as the hatch. Simple you might say, they are round hatches right? Wrong. They are round with a flat top at the hinge.  So once again I experimented with various cardboard shapes (different size surrounds) and settled on the size I liked I traced the template onto 12mm ply and cut them out. I then marked the positions in the decks and cut the holes in them. Then the obligatory de-core and back filled with uni rope and filler. Then once set and cleaned up again I glued the ply pads to each hatch and glassed them on and bogged onto the wet glass ready for fairing. I sanded the bog with a longboard to ensure that the pad was flat and ready for the rest of the fairing material (highbuild). 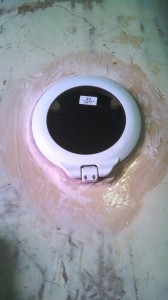 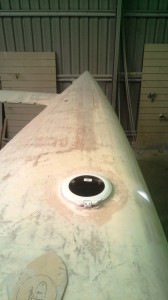 There is much debate about whether forward hatches should open forward. The conventional and safe thinking is that hatches forward of the mast ought to open aft, so any green water that hits it would close it and therefore save the boat from being swamped. To that I have 2 comments, first is that if you are underway with hatches open you get what you deserve, and secondly, most cruising boats, in fact most all boats, spend 90+ % of their time swinging on a mooring or anchor, and because a boat swings nose to wind, and in the tropics where it might be stifling hot for a similar percentage of time, you want the hatches to funnel airflow by having them open forward. So as you can see from the pic to the left above, the cardboard is a representation of my wing mast position, and the hatch is slightly forward of it and opens forward. So next hatches are in the hulls. 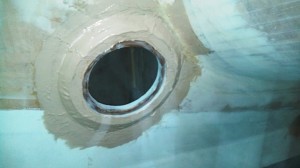 Because the inside hull panel is tortured into a twist and continues onto become the chamfer panel it too is not a flat surface necessary to mount a hatch on so first job was to cut and glue a flat ply pad for the hatch to fit onto, similar to the pads I had to fit into the curved cabin top, again to turn a curve into a flat area to mount the hatches. Except this ply pad needed to be way oversize to accommodate a fairing around the hatch. The reason for the fairing is to protect the lip of the hatch from oncoming, at velocity, water that pounds along the hulls in certain conditions. My fear was that if water could get under the hatch lip it might force its way past the rubber seal and into the boat or worse, force the hatch open by breaking it open. By burying the edge in a fairing that surrounds the hatch edge and deflects water over the face of the hatch and away from the edges I am safeguarding the hatches from such an issue. Hopefully. The sea is a very powerful force. I made the surround out of offcuts again starting with a cardboard template of the entire frame. But because I no longer have any material large enough to cut full one piece parts out of I cut the template into smaller parts and found offcuts that the smaller sections fit. Once I had made the surround I needed to de-core and back fill with filler and sand smooth before I could fit it to the hatch pad. I can tell you, if I am way over this de-core and back filling. Its a pain. But it has to be done. Even on fairings that do nothing but deflect water away. 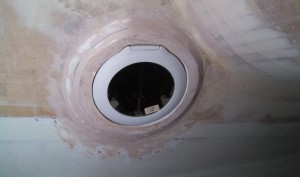 As with the curved deck, in some places the gap under the pad was larger than in others as the hull side twisted. I could feel the hatch rocking by about 10mm on the high points to low points before I put the pad in, so I knew it was going to need a fair bit of fill under it. I had to put screws through to hold the pad in place while the glue set but I couldn’t screw in tight because I didnt want to pull the ply pad in to the contour already there or that would defeat the purpose. I want the pad to retain its flat surface and let glue fill the voids under it. As with the deck hatches, once it was in place I again checked with a straight edge that the pad had not pulled in anywhere and then I glued the fairing around the hatch over the pad and when satisfied about its placement (the gap around the hatch) I glassed and bogged it ready for fairing. So five hatches fitted, all the same, just 2 to go, the big 20″ round escapes. (The 10″ round hatches are all the same, but the one fitted in the hull side has a middle strut, the deck hatches have the strut-less friction hinge version. Friction hinges sometimes loosen and need re-tightening with an allen key but because of its position under the tramps I figured it would be too difficult to adjust so opted for the strut model as it needs no external adjustment.) 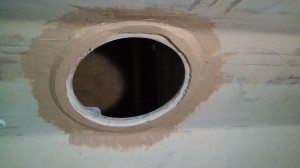 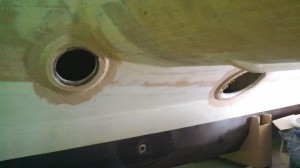 Although the 2 hatches are in different places on each hull, both ended up being flat areas so did not need ply pads, just the surround, and being even bigger ended up being made up of more parts and as there is a hull chine and the bridgedeck underside intersecting the fairing it took some fine tuning of each shape. Again once made the inside edges needed backfilling and the outside edges angled away to form the fairing, then once all made, glassed and bogged. 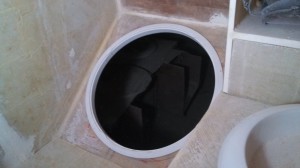 The mounting bolts go through the uni ropes in each hatch and I decored deeper where the bolt holes are just to be sure. So apart from some more fairing these hatches are pretty much done. And as the escape hatches are under the bridgedeck I am not going to be too fussy about the quality of the fairing under there. The escapes are in the bathroom in the port hull, so about a third of the way from the sterns, and in the steps up to the bed in the starboard hull or about a third of the way from the bows. 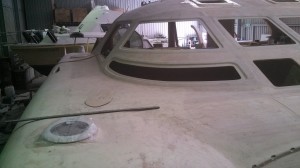 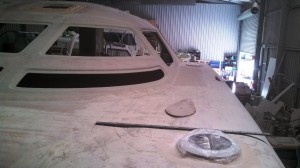 There are still many holes still to be made in the boat, for example the stanchions and winch pad bolt holes, but the list is getting shorter and shorter.