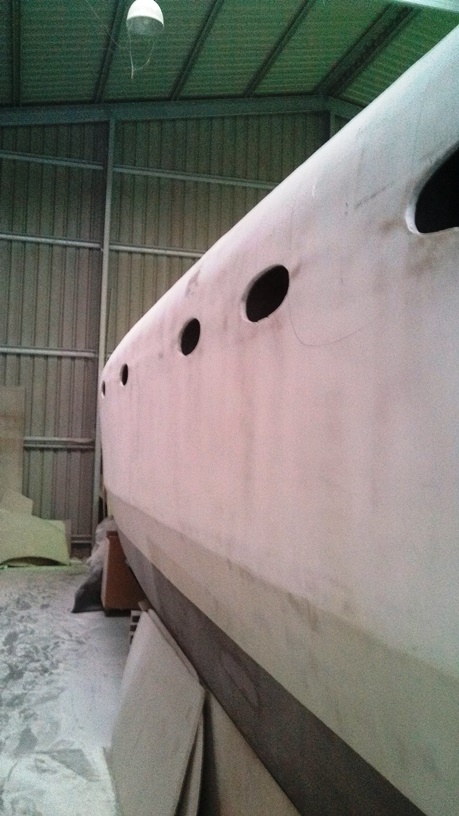 Famous last words, but I left off having bogged the port hull from the deck edge around the curve and down the flat side panels to the chine. That first bog screed took me about 6 hours, 4 on the first day, 2 on the next. (I am finding that I can rarely do more than 4 to 6 hours before I am exhausted, my body is starting to feel my age). Today I managed 6 hours (10 to 4 with many breaks) and got the entire port hull sides sanded. 12 hours for bog and sand of an entire hull side didnt seem so bad. 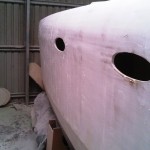 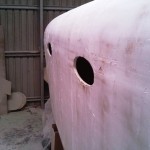 Yesterday I only had a couple of hours to get some work done and I fully intended to get a start sanding but Terry had paint tacking off so I didnt need asking twice to not make dust and gladly put off sanding, any excuse flies really, so I started the bog screed on the starboard hull instead. 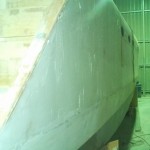 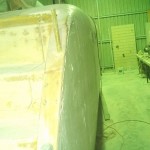 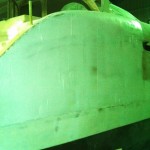 So as I said, today I started the rather daunting process of sanding the hull sides. Thankfully today was not a torture board session, rather an electric half sheet orbital sander. (I hopefully will have an air powered Rupes powerfile, a 450mm orbital with narrow 50mm head to hit it with next after the back filling, before finally having to hit it with the torture boards after the 3rd bog run). 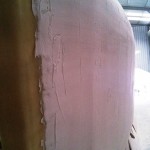 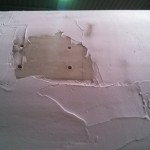 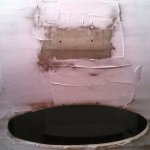 The idea of the orbital sanding is to take all the tops off, all the lumps, all the ridges created by the edge of the screed tool, in short just knock the top off. I am not actually fairing yet, just creating a base and trying to get a basically fair layer to start with. Purist apparently even do this with hand boards, but even the pro’s in the shed use orbitals on the first run, they seem to prefer the round head random orbitals. I liked using the half sheet sander, its a bit teeth rattling and loud, and of course with 40 grit really makes some dust (breathing mask is not optional here) because it is not nearly as hard as torture boarding and gets the job done fairly well. With the half sheet (110mm wide 250mm long) sander, or any sander including hand boards and long boards, if you keep the sander moving, use a union jack pattern, so left to right – right to left, then up down down up, then across at 45 degrees and back and then across at 135mm degrees (45 the other way). This way you dont dig holes with the sander and you keep basically fair, one point to any other. This is the same method I will use with the boards. 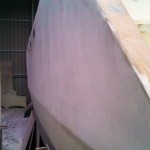 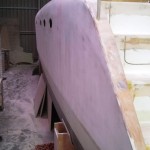 I realized a couple of lessons that I already knew but couldnt make myself follow which after today I promised myself I will not break again. First I mentioned in the last post that it was better to ignore scars and holes (created by the pull wake of the screed tool across the wet surface) and let the bog set before attempting to fill them. I couldnt resist using the small trowel and filling some as I went. All this did was create even higher highs that needed to be sanded back down again. More effort and more bog needlessly. You will sand off so much of each bog screed that filling a hole after the layer is sanded is likely to use half as much filler to fill a particular hole than filling it before sanding. 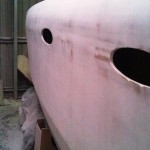 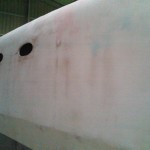 The second lesson is going to be harder to stick to (some habits die very hard), but I can attest to how much easier work is if you do. Today I started off in my usual tight arse ways trying to squeeze another 10 minutes out of the sand paper before changing it. It still feels gritty and is still making dust, but you waste 5 of those 10 minutes because the effort and area covered sanding with worn paper is double the effort for half the area to what you achieve with new. If it took me 10 minutes to do an area with worn paper, it would take 2 with fresh. After about 2 meters of hull I started changing paper much faster and the work was much easier. 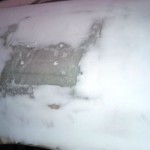 It also is fairly evident that the hull sides from the chine up to the middle of the window line (the point where the curved strip planking started) is not going to be too much trouble. The panels are flat, and I did pretty well getting the bulkheads stood so that the panels are fair fore to aft so that wont be too difficult to fair, its really just to fill the weave and cover the z joints where each 1200mm x 2400mm panels joined along the 2400mm length, remember, the very first thing on the actual build all those years ago. They are all but gone now.

The strip planked panels on the other hand is where all the work will be. I can already see a hollow just above the tapes that joined the panels to the hulls sides about 100mm tall and about 1mm deep (you can see this in some photos, from the mid port hole line to about the height of the top of the port holes). The line where the hull sides join the strip section, exactly middle of the port holes is the high point on the panel and it curves away from there, so I was sure to sand as deeply as I could along that line. (This is the point along the hull where the boat is the widest). No point having high bog on that line, it just means that the panels get deeper bog either side of it if the bog is piled to high along that line. You can see that line sanded through in places in the pics. The lesser the bog along that line the less bog I will have left on the boat when it is fair. The ideal is just enough to make the substrate invisible, if that bog layer is less than a millimeter in places all the better. High points sanded through will be the norm all the way to the final highbuild sand just prior to topcoat. After running the sander over the hull today I could still see the hip (I expected that I would) and also ran a batten over the hull to see if I could see the lows under it. I could so marked it out on the hull in the way I did when shaping, and then ran some new bog over the area. Hopefully only another bog run or 2 and the hips are history.

I am quite happy with the hull sides so far. I can see I still have some work to do rounding the strip planking. I can feel it is quite un-round if that is a word. But I can also see how it can be made to feel round fairly easily (in theory), the sanding is going to be harder work but the bogging not so much. I think I will be ok though.

Some builders, and Schionnings mention this as a recommended method, use a notched trowel to fair rounded sections. The theory being that with notched bog lines it is much easier to sand the thin lines of bog fair to each other because you are only sanding a fraction of the surface area. You sand all these lines to each other using a long board, then you back fill to the sanded heights in between each line then sand again to have a good fair with less elbow grease. I used this method to fair the forebeam. It worked ok for me.

Others including all the pro builders that have worked in the shed warned me off this idea because you never sand in between each line and therefore have not keyed it properly and the bog wont properly adhere. As I watched some of the holes under the flat sander surface slowly make the hole shallower below it, it occured to me that this was another example of un-keyed surface that will be filled over and that bog will stick ok, so I think their objection is somewhat flawed. Perhaps the surface area of un-keyed area is a lot less if not using the notched trowel method? Nevertheless I am not using that method. I had pre bogged the forward inside bows with a notched trowel ready for eventual fairing and the pro that was originally going to be fairing my boat had his offsider sand it off. I wont re-apply notched trowel bog lines, I will just carry on with the current method, even though I think it will be physically more demanding.

I can already see a big difference. That’s part optimism part the fact the bog is white so the psychology of “looking” closer to fair. And partly because although the work is physically demanding and you get covered head to toe in dust, and it is slow, time consuming and boring work, it actually progresses fairly well. You get to see the difference.

Next step is to go along and back fill the holes still there and to add more bog to the curved strip planking as close to round as I can. Some people have suggested making curved screeds but the shape changes so much as you go along the hull, that perhaps only a third of the hull curve is a consistent curve, that I am not sure this will save much time. I will give it a try and see.

Then once I have another layer of bog and fill on I go over again the rupes or the orbital again with 80 grit. Then I think a really sloppy, almost straight resin but not quite, tight wipe of bog and the long boarding starts. The tight wipe should also minimize pin holes. Then more long boarding at about 120 grit before the high build starts.

Before you know it I will be doing what Terry was doing today. Fitting hatches must be a very satisfying job, with years of struggle to look back on while you work. Thanks to the many comments and encouragement. Keep them coming. 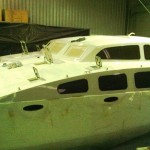