Lots of little jobs done on Saturday in order for lots of little jobs to be finished in Sunday. Such things as back filling eges, glassing smaller parts together before the piece goes into place (because glassing these small parts in place might be too difficult to get to) or painting some parts with white epoxy off the boat to ensure I get the white epoxy where it is supposed to be and not everywhere else it is not. And of course some parts cant go into the boat until some other part is glassed in and I did a bit of that too, so whilst I was flat out all day (on a fairly hot day, summer is fast approaching) there was not much of substance to show for the days work but I did feel extremely satisfied. I know when I have had a good day working when I drive home sore and tired but knowing I got a lot done, even if it is not visually obvious.

First job was the relatively easy task of grinding down the triangular pine stringer glassed to the chamfer panel to provide the other side of the support for the drawer base, one had already been glassed to the inside of the cupboard front. Because the chamfer panel is angled the pine stringer top face was also angled so only the corner was presented to the base, this is not an issue but the broader the edge the better the surface bedding it gets. I had considered grinding the corner down before glassing it on but that would have meant that I would have to be very precise with my glassing of it on. By grinding it down after I was able to get a very level platform. Being timber (and not part of the hulls) I can put a screw into each corner to hold the base down and I probably wont ever need to open it up again, but if I ever do it is just 4 screws to remove. Very easy, and no-one would even know it was there if I didnt tell them. For all intents and purposes it is just a drawer base. 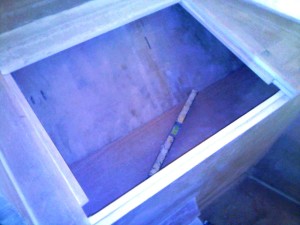 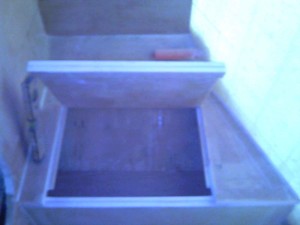 That pretty much finishes that cabinet but above it is a conduit path that passes from the stairwell wall on one side and through the main bulkhead on the other as the wiring, controls and information passes around the boat. From the stern power for starting the motors, as well as radar information from the radome to the plotter screen and other power and data must travel through the bulkhead and from forward under the top step of the stairwell power must come from the batteries and power board as well as a depth transducer data from the port hull to the nav area (chartplotter screen). So a lot of cabling moving through the area. Initially I was not planning on needing for it to move through conduits under the stairs or through furniture to be hidden as I was contemplating having a raised floor with battens and ply floor strips with cork over it, and under which cabling could travel in a very direct route but have (for now) abandoned that idea as un-necessary. I have plenty of head room and the floor area to be raised after furniture is in is minimal so I may still do it but it seems unlikely now.

So in the middle pic above you can see the conduit coming in from under the stairs so next step was to cut conduits through to the back of the boat. As mentioned, because of the radome being in the starboard aft corner there is probably a need for more conduit space than needed coming aft to the nav cabinet (which is directly above the aft bedroom on the bridgedeck). I still find the easiest method of cutting conduit holes to be the die grinder and router bit. I guess a hole saw would be equally easy and I do have one, but in many cases due to changes of mind or plans holes need to be cut in places where getting a hole saw in is impossible so I just do them all with the die grinder now. Next I simply glued and glassed these 2 conduits in. The space in between these 2 through bulkhead conduits will be covered by a box that presents a face and a top to the cupboard area in the bedroom, the top becoming a small shelf and the front will have a power outlet (a 12v and a 240v) on the front face. The back of that area goes directly to the under bottom shelf area of the nav cabinet. 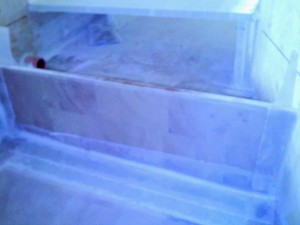 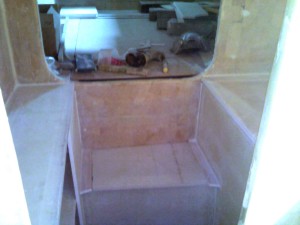 Next I finished a little more on the step, glassing a support at the bulkhead to hinge the lid to and glassing another thickness to the front edge and shaping it to the curve of the front, de-coring it and filling it ready to replace it to the step once set and sanded. This lid will eventually be upholstered as a seat as well as a step. Then I coated the wall that separates the bedroom from the nav cabinet with white epoxy. I am using 9mm ply because I have plenty of it and not much polycore left so apart from a little extra weight there is no reason I cannot use it, but it needs to be sealed with epoxy and I am using white epoxy on the inside of all other cabinets so I gave it a coating off the boat so it would dry without drips or runs painted on a bench horizontally as opposed to vertically in place.

Then to round out the day I started building a ply box to house my supersize (15″) plotter screen. There is nowhere large enough outside at the helm to mount the screen to the helm (and for security reasons I dont want it mounted outside of the locked boat, a good screwdriver as a crowbar and that screen is gone leaving me a hole in my bulkhead) and mounting it inside the boat means it is in the way when not in use (which is most of the time) so the best solution was to have a hinged lid to the bench with the screen housed in a box under it, and that can elevate on brackets up into place for use when underway or when we might want to use the screen to watch a video in the cockpit.