Back on the boat after the Sanctuary Cove boat show. Numbers were well down at this years show, and it didn’t help that I had a pagoda stand outside so when it rained I had no-one passing my stand, and it rained most of Friday. Last year we lost an entire day due to weather and this year I lost most of a day because of weather. Having said that, whilst being in one of the main halls (giant tent) during the rain may or may not be advantageous. Just because people are milling about indoors near your stand does not mean it is better than them not being around, often you get people crowded onto your stand with little or no interest in your product and literally blocking access to genuine customers, so it is debatable whether having a captive audience if of benefit. Anyway, as is usually the case I wont know if the show paid for itself for some time because often (and I am not different) people will take a pricelist and go back and consider their options and measure up to ensure the hatches I have fit their boat.

Apart from being outside my stand looked pretty much the same this year as last, there has only been a few minor changes to the range, the round 10″ hatch now has a friction hinge instead of a strut, a new stainless trim to the oval port light, the large size tackle center and the inspection plates.

Back on the build I have started glassing in the aft bedroom wall and the cabinet that it forms into as it comes up from the starboard hull onto the bridgedeck. The first part to be glassed to the boat is the kickboard of the nav cabinet. The aft bulkhead wall bends around in front of the kickboard so if the wall went in first it would make getting the kickboard glassed both sides quite difficult if not impossible.

When setting up the wall I had to be absolutely sure that it was plumb (square to the floor) along its length. To do this I just had spirit levels set up at various points along it. They all remained level so I have a plumb wall. By the way, using a spirit level as opposed to a square (which I also use but this must be removed to glass where the spirit level is clamped on through out) you are assuming that the boat is still level. I set the hulls and bridgedeck levels over 2 years ago so it would not be incredible for it to have moved, but I recheck the level on a regular basis but running the spirit levels across the top of bulkhead 5 as my reference point. It is the one between the saloon and bedrooms and is about the middle of the boat for and aft, I also check the level fore and aft across the top of the bulkheads that separate the bedrooms. So far the boat is still level, if it were ever to move I would have to figure out how to re level it.

It took me pretty much all day to glass the wall in. It doesn’t look like that big a job but it took me 6 hours. I did a few other bits of work, such as back fill some edges of exposed shelves in the nav cabinets and called it a day. 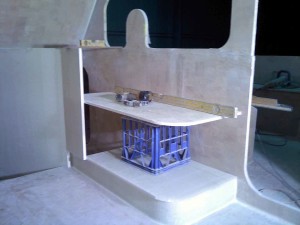 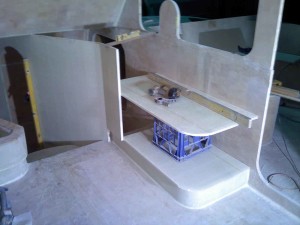 I dry fitted the shelves of the nav cabinet, which nicely shows the end shape it will take. I have to decide on the shelf height, there are arguments for a variety of heights but in the end I think centered is about where it will go.