A most frustrating day.

I arrived at the shed at 10am today excited about the prospect of joining the hulls together for the first time. I started the day with the starboard hull level and after some quick checks yesterday before I knocked off I thought the port hull wasn’t far off either. Warren told me he spent 3 days levelling his hulls. He did his in his backyard, not on a levelled concrete floor so I thought I would be able to do mine a little faster. Little did I know!

I got the stern of the port hull level with the stern and the bow of the starboard hull at waterline 1200 and what seemed to be level with itself along the other bulkheads at WL1200. But the port bow was a little higher than the port stern at WL1200 on the hull centreline even though the CL1500 marks were level on both hulls at both stern and bow and level with each other along the hull. I thought perhaps that if I only had one line mark not showing as level that it could be a mark incorrectly scribed onto the bulkhead from the plot sheets. I checked it for level with a spirit level and the line seemed a little out. So I tested stern to bow from a different bulkhead but got the same result. The bow was low by about 10mm. No problem I thought, I will just raise it the 10mm and I am done. I wish!. This started a chain of changes that each changed some other levels. At all times I did not touch the Starboard hull considering it to be my datum. I raised and lowered the bow and stern of the port hull, I wedged the outside bow, then the outside stern and still I have 3 of the 4 corners of the boat level with each other.

Sometimes I got the levels correct along the port hull only to find it not level at some point with the starboard hull so I would fix that only to find that fixing it would make the hull out of level within itself (bow to stern), but fixing that made it out with the other hull and the merry go round went around again. Doing this on my own meant I probably walked (and climbed up and down ladders) about a kilometre today.

I now have the stern of the port hull about 10mm high and higher than the starboard hull also, and the bow of the port hull is higher than the bow of the starboard hull by about 5mm even though the WL1200 lines seem level and what seems like the rest of the boat level. If I lower the stern the bow moves up (and it is already 5mm too high), if I then lower the bow the amount it moved I am no longer level with the other hull or the stern moves again and so on, and so on. Are you confused yet! Imagine how I felt doing it!! I am resisting moving anything on the starboard hull but I am running out of ideas. Maybe a break and tomorrow I will come up with the answer but I am sure you can see how frustrating this is. Maybe I am being too fussy. I mean a few mm over 12000mm is probably not going to make any difference but for now I am determined to get it perfect.

I (well Warren actually) cut slots into the edges of the bulkheads and the joining bulkhead parts. The idea being to run glue down the join and clamp it down again creating a narrower edge of the sheet. Each saw slot is about 80mm deep so with both sides of the join (bulkhead and bulkhead extension part) done this way I should end up with a 150mm trough for the fibreglass tapes to sit in so that when the tapes are set I can run a little bog over it and fair it back to invisible. I did this wherever the bulkhead panel join will be visible when finished. Anywhere where the join is covered or closed in such as forward of bulkhead 5 which will be inside the curved up section and inside lockers etc. I didn’t bother I will just tape this in the normal way and just feather it out but not fair it.

Finally, to cheer myself up (I wasn’t really upset, in fact I kind of relish the challenge but it is a little annoying to work for 7 hours and really not achieve much) I dry fitted the first of the bulkheads I will glue in only to find it is too tight a fit by about 5mm. I have the correct hull spacing so I don’t understand this either but that is a problem for later in the week! I may end up with a boat with a 5mm wider beam than I thought! 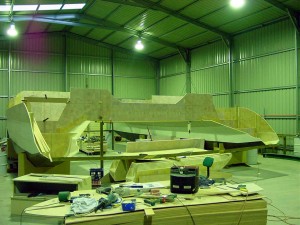 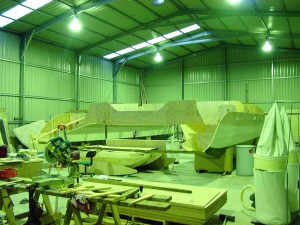 I must admit I am excited by these pictures and really look forward to getting the hulls joined and the bridgedeck up in the next couple of weeks. I wont get much done tomorrow because the Central Coast outrigger club is hosting the State titles and it was their trailer that moved my hulls so I feel duty bound to volunteer to help. It is the least I can do to thank them. It is an early start so I may get a couple of hours in the afternoon on levelling these hulls. Or not!