Friday 13th and I had Brett Schionning down to help with the chamfer panel. As readers of my site will know, we are one of the first building this design and there are some minor gremlins in the kit cut, so Brett wanted to see for himself what they were and how the hull goes together. The past identified errors were a piece of Duflex about the size of a pizza slice that needed adding to bulkhead 8 and the keel panels are shy about 2cm at the widest point so I need to make a long piece to fill the gap. I could just use filler but I think it will be faster and cheaper to make the piece from an off-cut, glue it in and then backfill the rest.

The chamfer panel is under the most stress and has to twist and bend in 3 directions so is also the hardest to apply (and never having attached one I was grateful for the expert help. Having said that, we didn’t have too much trouble. The panel as it comes out of the kit is a little out, we had to cut a piece about 15cm wide tapering down to nothing over about 2 meters and I will have to add a similar section to the top of the hull again to build it back up to where the deck curve starts. We placed the panel using the ratchet straps, screwed it into place overlapping where it was oversize. I then I went inside the hull and marked the line against the panel it overlapped and will sit next to when corrected and we removed the chamfer panel again and cut out the overlapping part with a jigsaw, then put the panel back on again. Simple! There is no structural damage. The panel was oversize and had a piece removed, and where it is undersize it is just under the section that will be strip planked and glassed and the glass would cover the section that is missing anyway so again no structural damage or loss of integrity. I would say that all of the extra work from the mistakes would add up to a few hours work at worst. I am still to cut the thin pieces of Duflex to fill the gap in the keel panels and that may take a little while say an hour or 2 at most, the rest have been resolved in less than an hour. If these are the biggest problems I face in the construction I will be very pleased.

The last thing we did on Wednesday was to pre glass the inside of all of the hull panels (the engineering calls for re enforcing glass on top of the glass already on the panels where it meets specific bulkheads to help spread the loads correctly) and before Brett arrived this morning I had also already attached panel 7 (the one directly before the chamfer on the inside of the hull) and panel 2 which is its corresponding panel on the outside of the boat. I have only screwed them in at this stage. I made good use of the ratchet straps and managed to attach both of these panels alone in just over an hour.

We got to work attaching the big panel 1 that finishes the outside of the boat and is the biggest panel of all. This turned out to be a really easy task as I have 44 gallon drums along side the boat and the panel was sitting one them where we had glassed it and it was a simple matter to tip it on its edge and lean it against the bulkheads and it fell just a few mm below where it need to be. Again I slung a ratchet strap over at each end and just cranked it up into position and screwed it down. It was a bit tight here and there so we marked it, took it down, ran a plane along it and replaced it. Also, here and there, wherever the panels met a little too tightly we ran a jigsaw along the join to make the gap wider. It is much easier to apply glue and then fill a small gap than a tightly fitting panel. So at first if you place panels and see small gaps, don’t panic, it is better this way and will be much less work. You can glue the hull panel to the bulkheads first and to each other later, rather than having to run a glue line down a 12 meter edge as well as each bulkhead. You will also end up with a better bond as all the glue will remain between the panels rather than be squeezed out by a really tight fitting join.

We then set about attaching the chamfer. We made blocks from timber off cuts to screw into as the balsa may not have held, the same way I did at the bow for the keel and bilge panels. We also made washers from 3mm mdf again from pieces I have saved from the packaging. After we had placed the panel into position the first time, it looked like we needed to make some minor adjustments to its position so as to minimise high and low spots caused by the panels distortions when attached which would need fairing so the less of these the less work later and the less weight and we did this by cutting small notches either in the panel where it fell against an mdf temp or in the bulkhead, and we did this by marking what needed to be done then pulling the panel away slightly and filing a notch out. But (Murphies first law, if it doesn’t need doing you will have already done it and if it does you wont have done it when its needed) it turned out we didn’t need one of the notches after all. I will cut a small filler and replace it.

We again used the straps to apply pressure for us rather than trying to push a panel under some decent loads into place and then hoping to screw it down. This way you get it into position, screw it down, then release the strap. Because we thought we might be applying a lot of load to get the panel down we even braced the hull at the bow against my work room with some timber, but I doubt that was necessary. As I said the panel went on relatively easily compared to some of the stories I have heard, and the hull panels seem very fair and only minor ups or downs where each panel meet and I think I will have little trouble getting them flush again. Just typing that is probably asking for trouble but it does look quite fair. 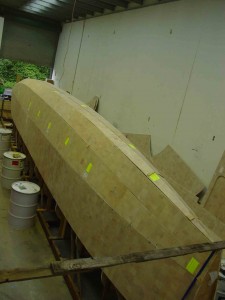 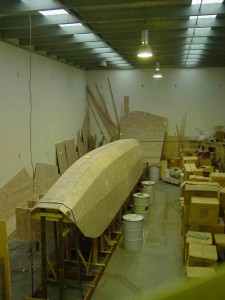 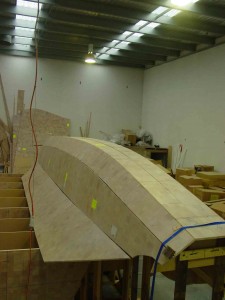 The next job is to unscrew the panels again half the boat at a time and starting at the bilge and working down (up the hull from the waterline) and gluing the panels to the bulkheads. Because the panels, especially the chamfer have remained attached to the hull for a while they will retain a memory of the shape they were cajoled into which will make it easier to re attach them alone. Then once all the panels are glued to the bulkheads I will start to fill the larger gaps with off-cuts of Duflex glued into the gap and the rest with glue to each other, then I will start to fill the gaps with filler so that I can start to shape the joins straight before applying the glass tape.

I have not taken enough intermediate photos as I would have liked but I think I have still managed to cover each task so that it could be vaguely understood so far. I should also tell you that there is something that pictures and words don’t quite cover adequately. After finishing to this stage and seeing the first hull take the shape you can see is a very satisfying feeling, one of immense pride of accomplishment. Whilst it is a long way off being a boat, it really does now look like part of one and is very similar to what you will see from other builders. If you choose to build, from time to time you will feel hot, tired, itchy or sore but these feelings all pale into insignificance when stood next to the memory of simply sitting and admiring the work you have just completed. And that is the feeling at this early stage, imagine the feeling at the launch. Long after the boat is launched you will forget the hours spent doing this or that, or the weariness after a long hot day, or the momentary discomfort of itchiness, but the memory of your achievement is much harder to erase. You will most likely be sailing in it!