The truck arrived at about 4pm on Tuesday 23 Jan.It took them until about 10pm to have the boat secure on the trailer. The stern needed to be elevated because the rudders hung too low to the ground, and at about 11pm they started moving the boat up the driveway. Earlier in the day the guys next door removed the fences and gates to clear the path, but unfortunately I had to cut away one fence stump as it was in the way of my port rudder and the truck was already all the way over on the other edge of the driveway (it falls away and the truck could not move its wheels any further over and remain safely on the driveway). The gate opening was wide enough so when the boat reached the road I breathed a premature sigh of relief.

Across the road the truck had to mount a slight hill to make the turn down the road and at the base was a gutter hollow. As the wheels of the trailer went into that dip one of the rudders scraped the ground for about 6 inches, just enough to scrape a layer of glass off. Fortunately there are about 5 layers of glass on the rudder base but I no longer have antifoul on that small section (about 10mm wide by 50mm long) of the rudder base.

Then it was about half an hour to the boat ramp and then we waited for the sun and the tide to come up.

At about 5.45am on Wed 24 Jan they started the process of launching at what was starting to become a busy boat ramp. At about 6.05am the rudders first touched the water and by 6.15 the entire boat was floating off the trailer.

The last week or so has been without doubt one of the most stressful of my life. The feelings I have are hard to describe.

We (my friends Terry and Cath, and for a while Jo and Jake, unfortunately Jo had to go to work and Jake had to get back after helping me get ready for launch) spent Wednesday motoring around Brisbane Waters to do a preliminary sea trial, albeit in sheltered waters, to be sure the motors were happy to run for hours so that we could motor the 8 hours home. We had a few hiccups with one motor, not quite idling correctly and neither motor would run with the engine covers down due to starving for air so we kept them open and they seemed quite happy (the longer term solution I hope is the installation of bilge blowers) so Lindsey came at about 6pm to fine tune them and reassure me everything seemed ok with them. Terry and Cath left at about 3pm after a beer at the Gosford Sailing club to celebrate with me so I had a well deserved and needed nap while on a public swing mooring about 100 meters off the club.

I was fast asleep at 8pm after the all night launch and up again at 5am to start the motor home. Terry arrived at 5.30 and we lifted Denis (he is in a wheelchair) aboard and started the 8 hour motor from Gosford to Wyee via the Swansea channel. We left at 7am and were at the Swansea bridge opening bang on 3pm (we literally got there with minutes to spare for the 3pm opening, had we missed it, the next opening isnt until 5pm) and less than an hour later we were tied up at the fuel wharf at the Wyee Point Marina.

Rather than pictures, here is a video of launch day and another of her maiden sea voyage home. 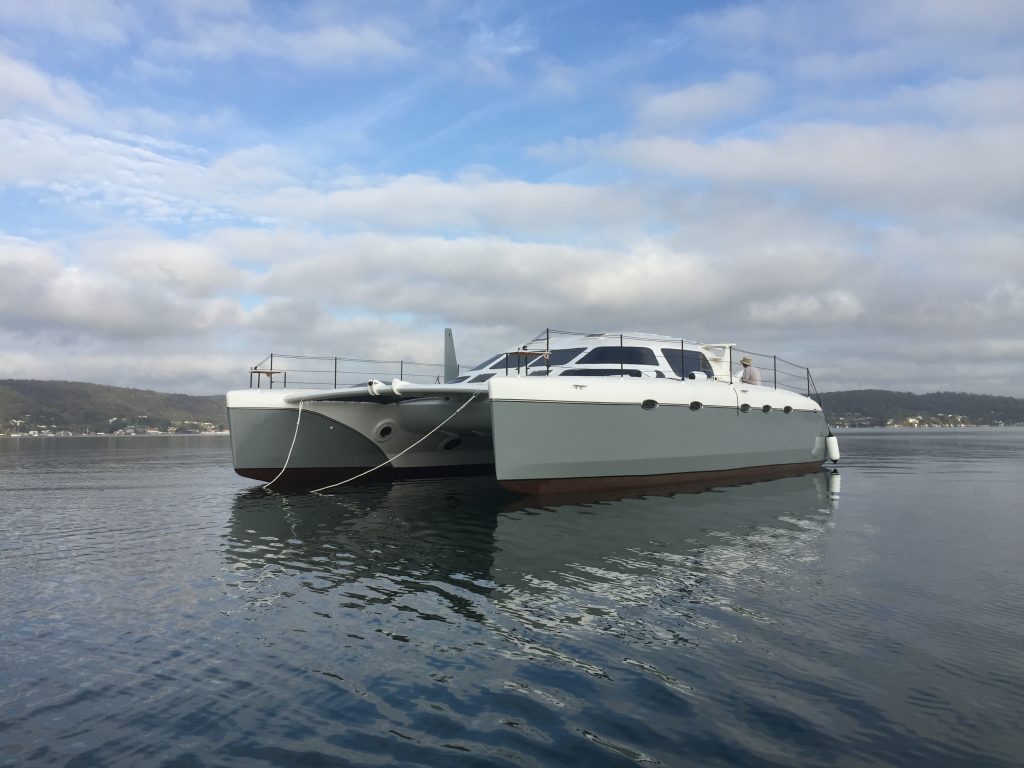 I will take a break for a while, clean up the shed so I can move out and move on from that stage. I will then start on finishing both the numerous small jobs not yet done, for example, the motors wont run with the engine covers, the rear steps, in the closed position because the outboard chamber fills with exhaust and the engines are starved of oxygen. The solution hopefully is a bilge blower in each well, I already have them, I just ran out of time to fit them before that deadline of launch hit.

And once the boat is on the swing mooring we will start using her so as to enjoy the reward of the hard work and sacrifice Jo and I have put in, but also to gain experience in handling her so that we get the confidence to venture farther and further from home.

Although there are many many more posts to come, this is an opportune time to say one final thank you to all of the readers who posted well wishes and encouragement along the way. Please keep the emails coming, I really do enjoy getting them and responding to them. Thank you so much for reading and for taking an interest in our (I hate this overused word but cant think of a better one) journey.