Voice in your head…

….You may as well do the job properly. Dont you hate that voice in your head sometimes? I have messed around on this build nearly 9 years now, why would you cut corners for the sake of a few more days work? Makes some sense I suppose, but there are going to be days and days of these extra little miles. Anyway, having filled the gap between corners and reduced it from 25mm to less than 5mm I was tempted to leave it at that, I mean, I had even contemplated not filling the gap at all, so difficult to spot it was in the first place. But that voice kept nagging me. Its down to 5mm why not completely fill it? Ok, Ok, I get it. Just let me finish already.

When you are filling more than a couple of millimeters of depth as I was with the first fill run across the front of the cabin, its is difficult if not impossible to get a smooth top finish as well as fill the void, even more so going over the top of the polycore base that I laid. The reason is that the trowel wants to pull a wake (and push one too) as you run it across the wet bog trying to get the surface smooth and fair and the end result is that you pull bog off the surface again. So first run just fill and get it as smooth as you can, second run, which will be much shallower, you can push down harder on the trowel to get that almost fair surface so that the sanding will be minimized. (You still have to sand the uneven first run because it needs to be keyed in order for the next bog layer to adhere but that sanding is not to remove highs or lows, just to rough it up). You can see in the pic above that I am within a millimeter or less in some places but up to 5mm in others due to not being able to smooth that first layer.

One other point of interest, the runnier the bog the easier to get to a smooth finish, the thicker (more powder) the harder to smooth. But the less powder you use the less volume you can fill with a given amount of resin and the harder it will be to sand when set. The resin is the heavier part of the bog, the powder, (in this case Q-cell microspheres) is the lightweight filler, and the name of the game is to fill with a minimum of weight. And the resin is the more expensive element also. So runny fill is for the last “tight wipe” used to fill minor nicks, pin holes and scratches. My rule of thumb for volume filling bog consistency (there is no set formula for how much powder you add, the resin to hardener is a set formula that must be adhered to but the powder ratio is job dependent) is to add powder until the bog is the consistency of peanut butter and the glisten of moisture is gone. Too much powder and the bog wont flow onto the panel well nor will it adhere particularly well and it goes off much faster in the pot in humid or hot weather. Its something you get a feel for once you have mixed a few pots. 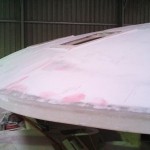 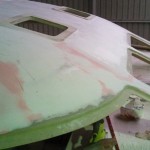 So I gave the first coat a light sand to key it up and checked the depth to fair with the batten. Originally the hollow was about 1500mm wide and 25mm deep. Now its about a meter wide and about 5mm deep at the deepest, but mostly about 2 to 3 mm deep. Again its tempting to say that will do, but I gave the second run a sand and filled again with bog. If after I sand and check the depth next time I still have a gap but its less than a millimeter perhaps I might be able to say its good enough.

I also took the chance to clean up the roof line at the front pillars. If you recall, the original roof line started out at the correct height at the aft of the pillar but as the roof swung around the corner the roof line took a turn upward as it went around the corner to the front. It was not supposed to do that, the roof line is supposed to be a level line just above the window line. I correctly made the window cut outs and the whole point of the last few weeks has been to fair out that roof line error. So the final step in that is to put back into the pillar a level line. I think I have achieved that now, they just need a bit of a touch up with a sanding block and to round the line over. 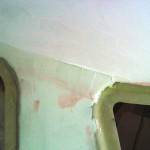 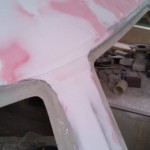 Here and there the roof itself is exposed as the sanding removes all of the bog again and the high spots of the roof appears. And you can just make out the outline of the old “brow” and the edges of the polycore panels here and there. This is perfect. It means I have sanded down as far as I dare go and that I have achieved my goal with the minimum bog thickness I could. (All of them will disappear again once the highbuild goes on, some will reappear here and there as I sand that layer until the next coat goes on and finally disappear forever under the paint topcoat). So, as I left off a couple of posts back, the next step really is to prepare the roof beam, hatch surrounds, solar panel pads and roof overhang surrounds with nicely coved edges and final spot fill so that I can apply highbuild. I still have a lump or two in the roof here and there but I think it is close enough to fair that I can ignore them. You certainly cant see them but you can feel them as you run your hand along, but removing them is too difficult on a cost vs benefit analysis.

Thats where I stand for now, until that voice in my head insists I can do better.