Last post I suggested it was really difficult to break out of our pre-existing paradigms. Even though I had decided that aesthetic values are not so important for me anymore I still found myself looking for improvements or disappointed if I did not have as good a “look” as I had hoped, regardless that the underlying structure had not changed.

That paradigm proved it still has a grip on me. I have been looking at a “fault” in the shape of the starboard hull side at the very stern where the steps are fitted for some time. It shows up in the form of a shadow from the lights showing that what should be a curved area is actually flat. I decided I could “fix” it without too much trouble so decided to give it a try. (you can see the flat section in the pic below, the before pic) 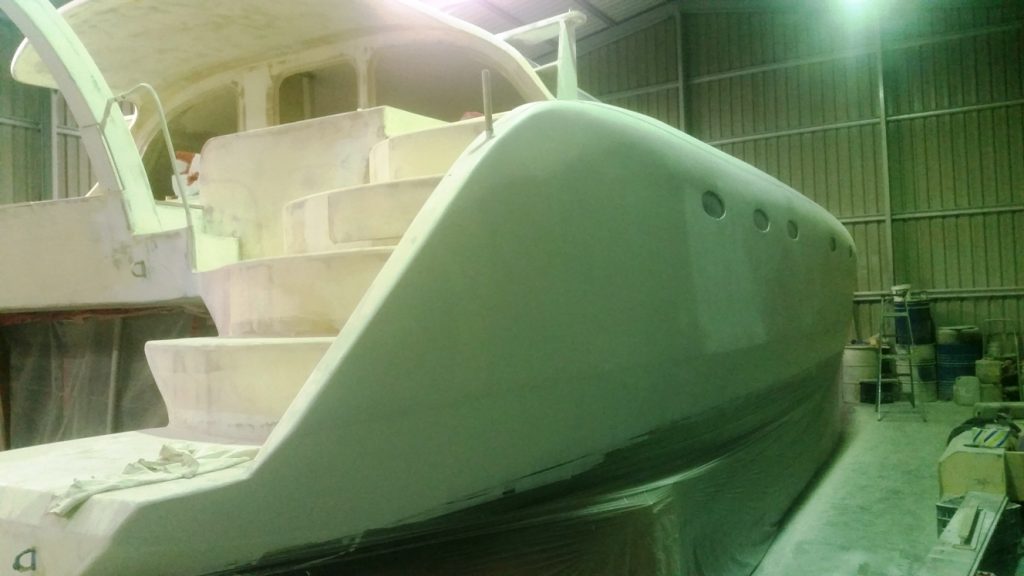 And surprisingly, it fixed first go, or at least it fixed enough for me to no longer consider it a “fault”!!! See what I mean? Its hard to let go of existing value structures sometimes. (No wonder we still pander to antiquated religious values when setting social norms such as same sex marriage…..no we still dont consider ALL members of our community to be equals, its the 21st century catholic dudes, time to let it go) So its not just me!

And now the after pic with the flat removed. I just added some qcels to some jotun highbuild (I did this to fill stipple and pinholes also) and layed it on thickly over the area and sanded it back to round when it set. Still a slight trace of it but much less and now its acceptable. 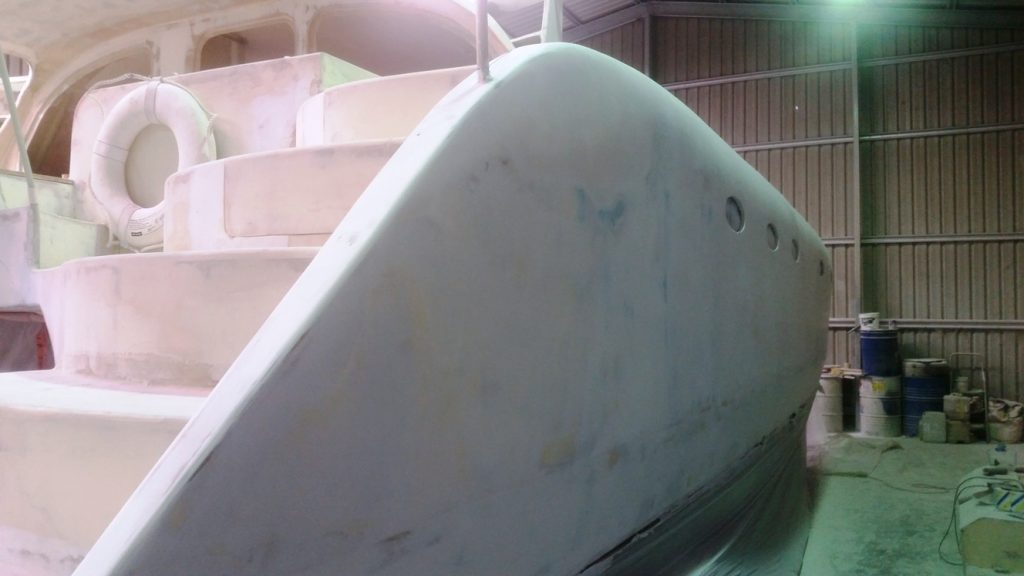 I still had stipple areas and pinholes that I dont consider cosmetic problems. They will need to be filled because its not so much how they look (bad) on gloss finish, its that they can create a void in the topcoat that allows moisture in behind the paint and degrades it until it breaks down and allows even more moisture in. The paint has to completely envelope the boat to keep the elements out. The best way to see them is to wash the hull down to see the gloss effect. See the stipple or pinholes to the right of the light reflection below. 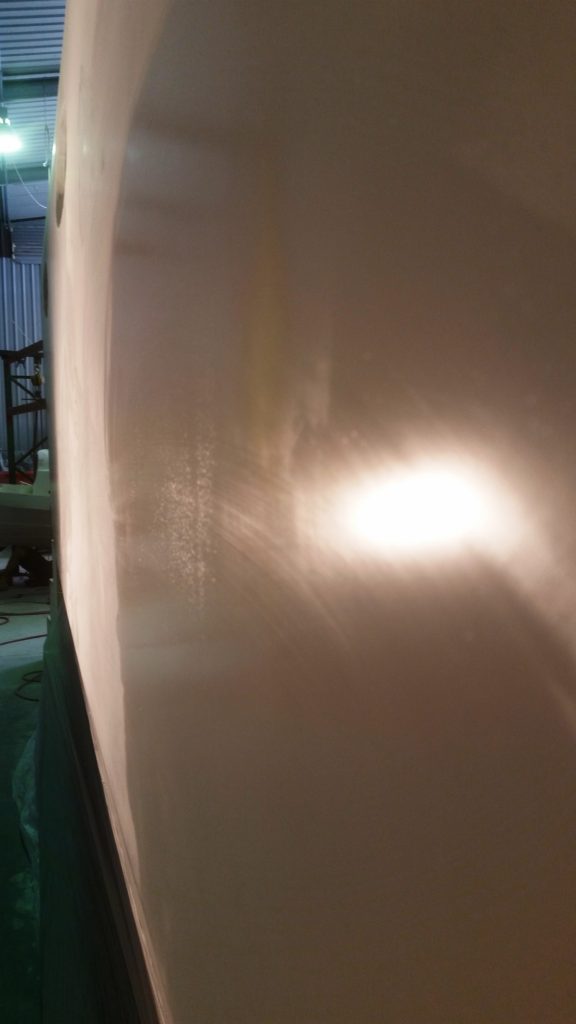 The stipple fill was just some more highbuild with qcel to thicken it further and then applying it with a scraper. A day later sanding it back down until it all but disappeared and with it the pinholes are gone. Well mostly gone. So with that fix I am calling the starboard hull completed and ready for top coat. If I find any pinholes I will still fill them but I will use car body filler, which sets in to sandable in about 20 minutes (its polyester and as such is not supposed to be used on epoxy but we are talking individual pinholes now not big batches of them like in the pic above). 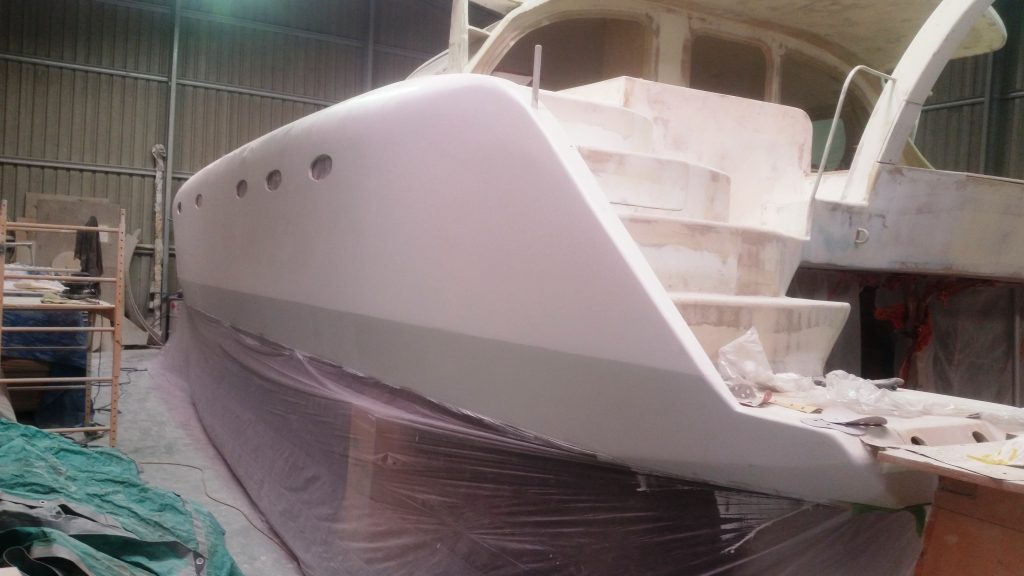 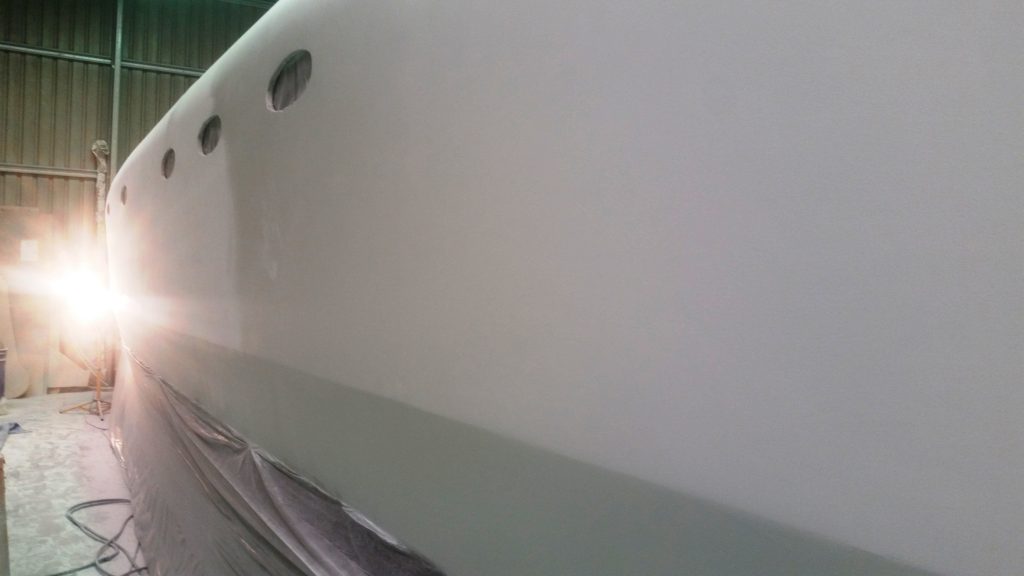 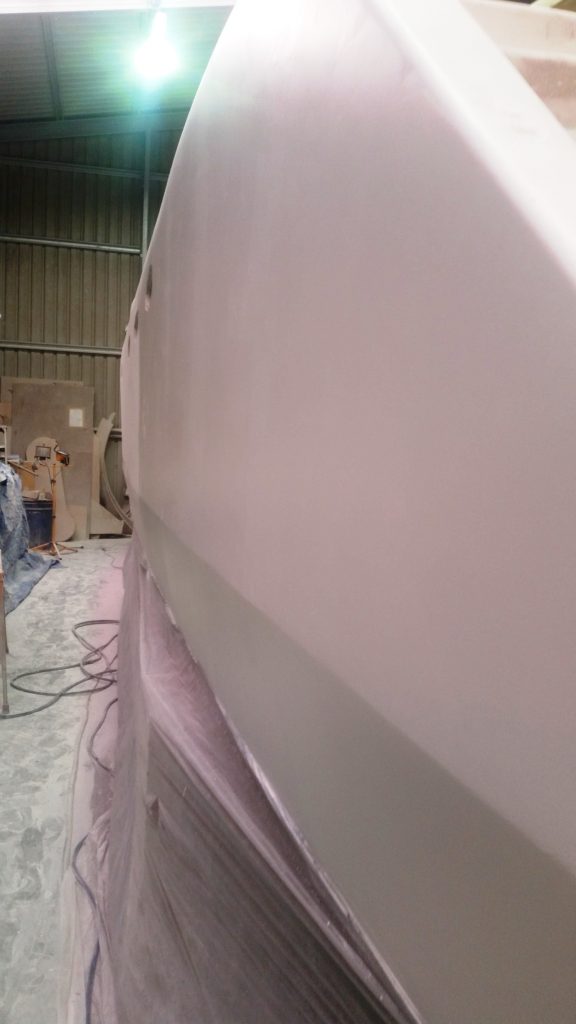 Next it was on to the port hull. Here I hit a snag that set me back a week or so. (Yeah, like I am gonna worry about a week when I am 6 years over time!) If you recall I attempted to spray the highbuild on the starboard hull but ended up rollering it on. Two days later I rolled the port hull and had enough left over (after mixing exactly the same amount) to do the bows on both hulls. I know I mixed it correctly because I set about to do that experiment to see if rollering goes further than spraying so I was careful with the mix ratios. 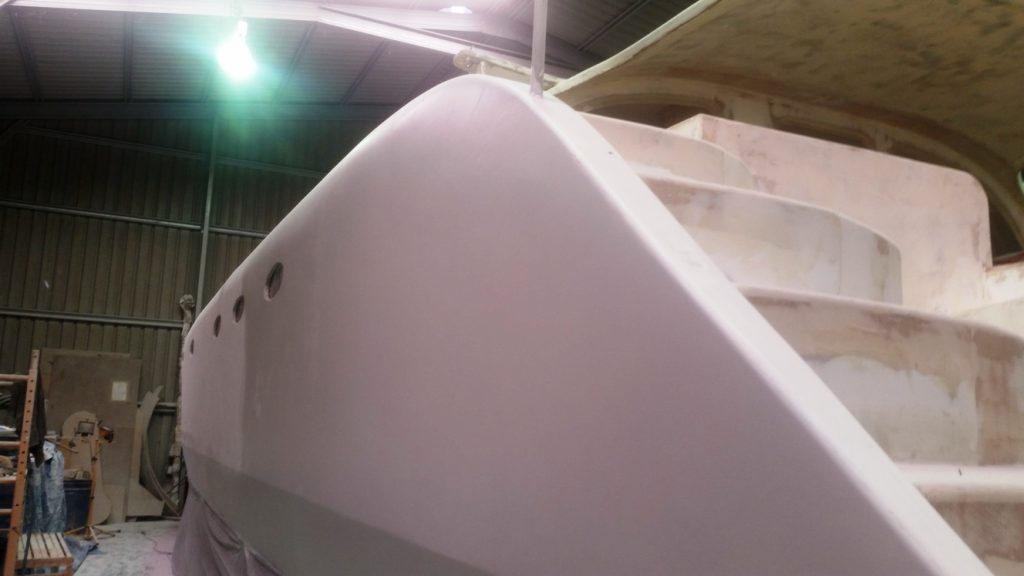 But after a week it still did not seem to be set. I waited another week and it was still tacky. But it was set. It was only tacky on the surface. In all the 11 years of building I had never experienced Amine Blush (or bloom, same thing). It happens when the epoxy (highbuild is still an epoxy even though its paint) goes off in a damp or humid environment so it can happen in winter or summer but more likely winter because of the slower set, the faster set seems to avoid it. It clogs sandpaper instantly as if it is not yet set. So I tried sanding every few days and kept thinking it was not set yet. Hence the lost time. The only way to get it off it to wash it off with water. I did this a number of times but still the sandpaper clogged. In the end I decided to go back down to 60 grit to re-key the surface and re-coated with highbuild. 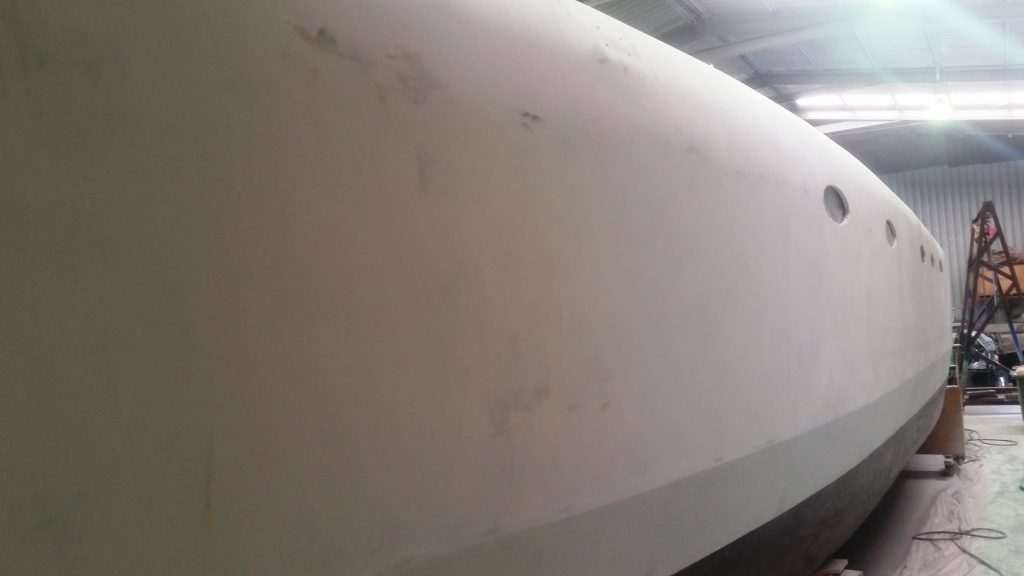 I did this and then it sanded beautifully. I lost a week and a coat of highbuild I originally wasnt intending to apply but no big deal. 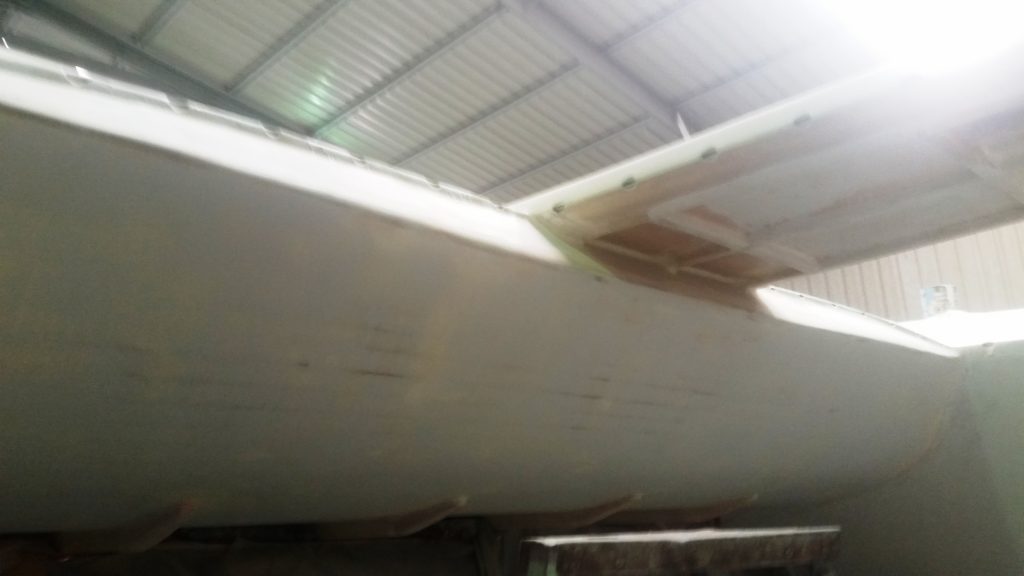 I still have to pinhole stipple fill the port hull and sand that back down again but this is a few hours work and then both hulls would be considered done and ready for paint. I have also sanded the D section microsurfacer layer ready for its highbuild layer which I will apply this week and then its on to the rear steps and aft panel. That will just leave the cockpit to fair before my brother arrives in November to paint. I think I can have that done in time but its a race now.

And it seems the clock is ticking faster now.

In the meantime I have also dry fit the stanchions in the starboard hull. Terry helped me as this is an impossible task with just one person. We lined them up with a string line using the already fitted half stanchion I fitted into the rear step sides as the starting point, then picking the height around the curve I wanted them to be. Not too far around or there is a large gap between the stanchion and the area of the deck where it starts to slope down and away from the walkway space. To far is dangerous in that it encouraged footfall onto a curved section that would be dangerous to step on too far up the curve and any lines holding fenders cant fall clear of the hull so they rub the paint off the curved area. My compromise positioning is about half way through the arc of the curve. The other problem with mounting them too far down the curve is the loss of height that mounting that far down caused. I made my own stanchions by creating a uni glass sausage and pulling it through a 25mm inside diameter conduit to set (the uni is 2 meters by 300mm, rolled into a sausage, folded at the half, then the sausage is pulled through the conduit by feeding it over a looped rope end poking through the conduit and tied off to a strongpoint then pull the rope through the conduit until the uni fills it, then I push the conduit onto a jig to hold it straight while it sets, then once set I cut the conduit off.) The reason I made my own stanchions was because of the extra length needed to compensate for the height lost by mounting them down the curve. A normal stanchion is 600mm and a stainless steel 6oomm is $40. Someone does make a 750mm stanchion, they want $99 for them, so a 150% price premium of an extra 150mm of stainless tube. I make mine for about a half hours work and $30 worth of glass and resin. I make mine a meter, so that 250mm can be bury against the bulkhead and still have 75omm height, with about 100mm lost to the curve, so about 650mm height against the person standing on the deck. 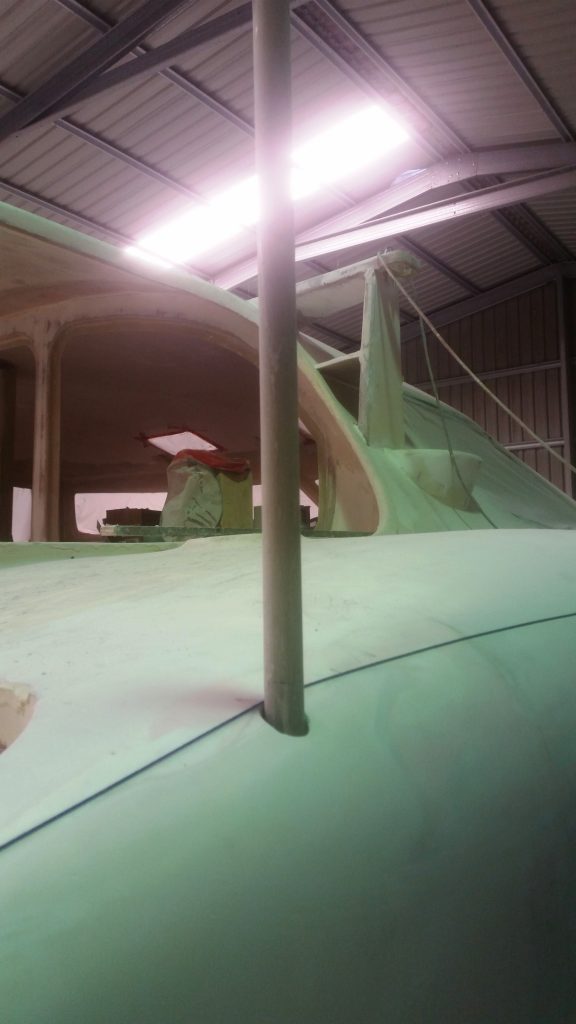 We did the most aft full stanchion first as it fell close to the half stanchion. We could also easily measure where the inside of the rear bulkhead would be so that we could mount it tight up against it. In fact we mounted them 5mm too close to the bulkhead so that I needed to ground down the rounded edge of the stanchion so that there was a flat surface to glue and glass it to the flat bulkhead. 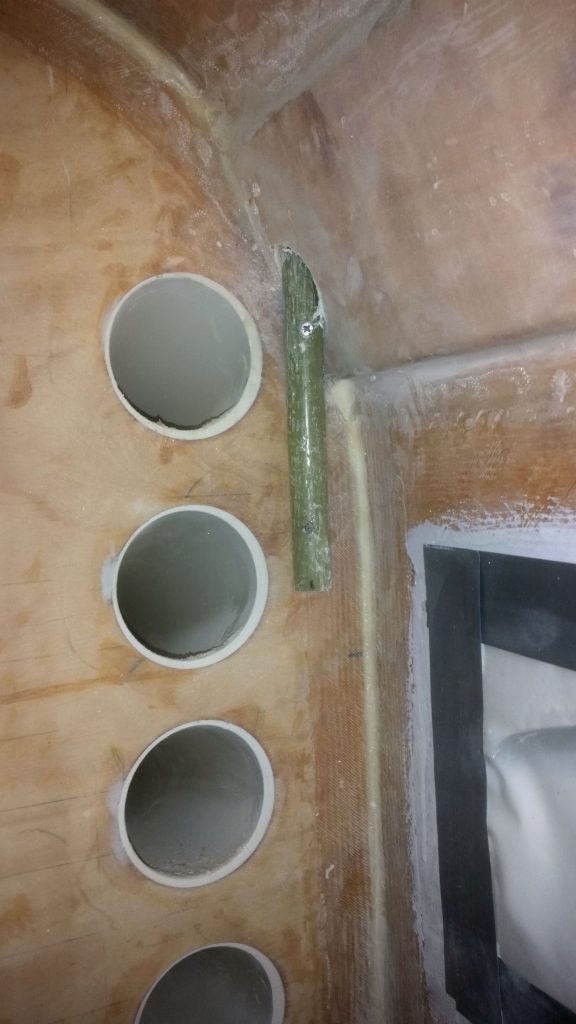 Each stanchion is mounted to a bulkhead except one that falls on the rear face of the dagger case and one that falls in the middle of each forward bedroom wall, these will have a 25mm ply gusset to mount them to the inside of the hull rather than against a bulkhead. Each stanchion is currently screwed in place, then each will be removed to be painted black, then covered in masking tape and glued and glassed in place. A 50mm radius glass ring will glass the outside and then be re-faired to finish it. 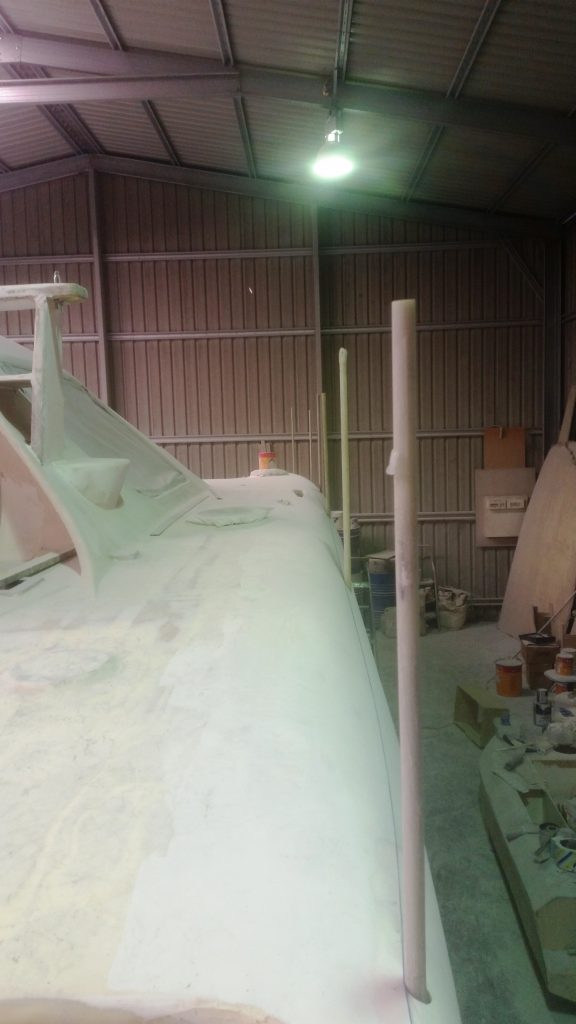 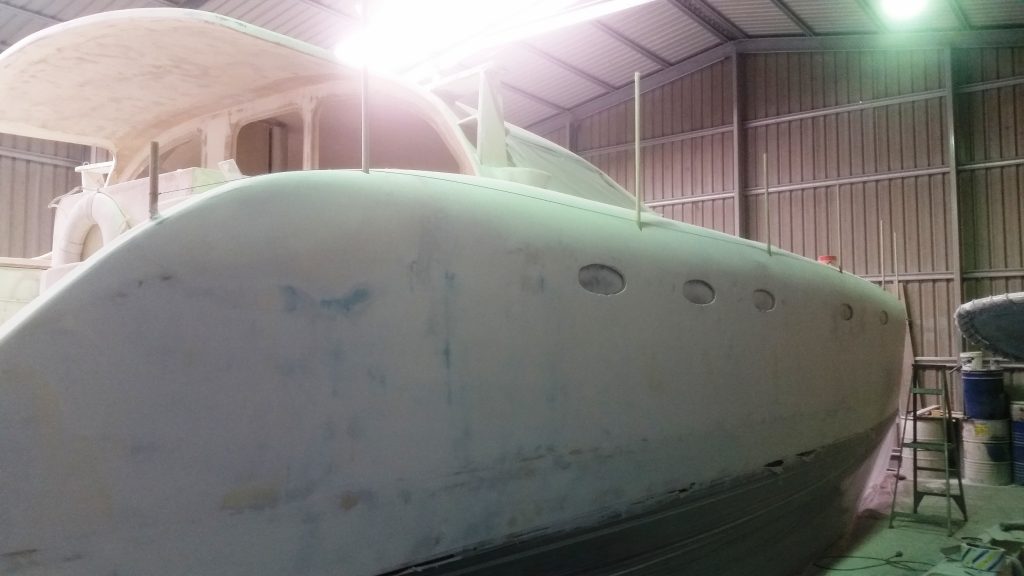 The very front full size stanchions will form the corner of either a 3 sided or 4 sided front seat, the legs of which will be half height stanchions and the full height aft outside corner stanchion will also have the front navigation lights attached to them, so for that reason I have fitted an aluminium tube up the middle of that stanchion so I can run the nav light cable down and into the storage well that that stanchion is fitted into, and from their the power wires will travel into the hulls and into the wiring loom. I am fairly happy with how the boat is looking. Its not perfect and I have not applied (nor will I) a guide coat so I have no real idea of how the boat will look until its painted.

Next week I will finish the forebeam, catwalk sides and D section and hopefully get a fair bit of the rear steps and rear panel done. That will leave me about 3 weeks to get the cockpit finished. Its a big call, because the cockpit is the most fiddly of the lot with lots of angles, coves and corners. But fortunately I only really have to do the vertical surfaces as all of the horizontal surfaces will be covered with cork, both the seat tops and the cockpit floor.

It seems quite tight to me. I dont think I will make it. But if I dont, I will just have to leave the cockpit until some time later and do it myself or fly my brother up for another day to finish it.

In the meantime I will keep working at it. Thanks for reading.