Ok, I know I said I would not be repairing the one pointy nose, but…..

Fairing is nasty. Its physically hard, boring, dusty, lonely work. I managed 5 hours of it today, and combined with the aches from last nights work shift I feel like a truck hit me, then backed up over me for good measure. And the cherry is its also addictive. I hate it and cant wait for it to be over. Because no matter how good you get it, you could always do better and something keeps you going back to it. And I find reading other blogs and forum discussions, that stopping is often a matter of finally deciding launching is more important that perfection. I told Jo I had mentioned on my last post I would not be fixing the nose, then decided to go ahead and fix it and her reaction was just finish the bloody boat already, to quote her “I will gladly go on it with one pointy nose just get it finished!”

I have just spent some time debating the pointlessness of perfection and instead of moving on to the next part of the finishing I kept going back to the noses trying to get closer to it on something only I will ever know was done. Either way, no-one would ever have seen the differences or as the case is now, the similarities. People would notice if they were way out, but not as close as they were yesterday, and certainly not now. And they would have needed a template and a very close inspection. Anyway, they are fixed now.

Yesterday was a 38 degree day and I started an afternoon shift so decided to spend the couple of hours I had bogging the port nose so it matched the starboard one. $10 of bog and an hour later and the noses finally matched. Or they will once I fill all the nicks in the bog and sand the nose to correct shape.

I have to say by the way, a bit disappointed with the response to the spot the difference original pick your nose quiz in the last post, seems people were too chicken to put themselves to the test! So I have a new one, “Pick your nose”; which one do you like the look of better, port or starboard? I think the starboard hull nose looks better, but thats only because I havent yet fully shaped the port one, it needs a little more out of the outside top corner, about 2 o’clock. I expect a few more emails this time.

Here are some comparison shots after the port hull fill in, I have not touched the starboard hull, it is exactly as it was in the last posts pics. 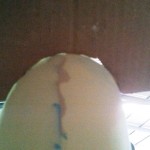 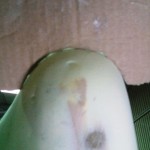 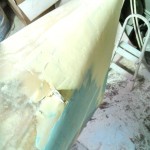 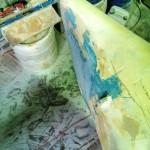 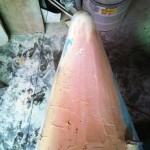 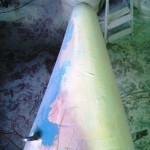 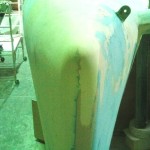 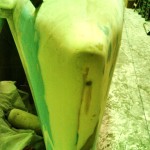 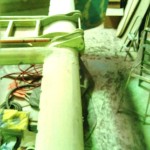 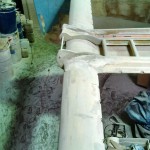 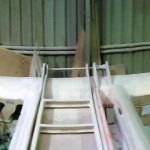 Today the temperature dropped to half what it was yesterday (and I am not going to see this temperature often over the next 3 months so have to grab them when I can) and I had about 5 hours so I did an initial sand on the bogged port bow, I will finish the shaping once I have filled all of the dings that are difficult to avoid when applying the bog unless its runny, the problem with runny bog though is you cant add much volume or it sags, so I wasnt able to pull as neat a screed as I would have liked which meant lots of pin holes, nicks and marks for later filling. Then I finished the third sanding run on the hull sides. (the first was the initial bog run screeded vertically, the second was the second bog run screeded to remove the hollow, then the next bog run filled nicks and marks etc). As I said, this work, at my age makes my body ache, so 4 hours of it is about as much as I can do.

I am using a combination of air sanders x 2, a long board pneumatic sander with a board 11omm x about 400mm (110mm being full roll width) with 120 grit and a Rupes 100mm air disc sander with 80 grit, the bohler with 60 grit and 2 torture boards, a meter long with 80 grit and another about 800mm with 120 grit. The Rupes is a beautiful sander, so smooth and quiet, I would never have the money for one, but Jake is pretty serious about his career and is buying all top shelf tools. (Jo and I bought him a really good spray gun for Christmas, and of course if he chooses to try it on, say, a 40 foot boat for practice then all the better!).

I use the Rupes on the bog mound to get all the sharp edges off and to get it down a bit. Most of the hollows that needed fill are less than a millimetre deep and its hard to fill that thin so there ends up being a mound where there was once a hollow so the Rupes knocks the top off, then the Bohler gets it near fair, then the pneumatic gets it nearer fair then the 2 torture boards finish it to quite fair, the shorter one with the 120 grit takes the sanding marks out. (on the high build I go on to 240 then 320 grit). 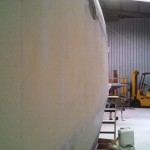 Once I have all the knicks and pin holes filled and have all the hills and hollows out (a test I do is run my hand along with my eyes closed, anywhere I feel a hollow or hill I stop and mark) I will be ready for first high build. Hopefully thats next week (I set the end of the year for hulls in high build as my goal so I might just get there). High build is 3 stages (I hope). First stage is a coat of Jotun Penguard HB, the same stuff I used on the roof. It acts as a seal coat over the porous bog.

After a sand down I will run a new high build I have been told about called International Microsurfacer. I have some on order, it should arrive mid January. It goes on thicker than normal highbuild and is apparently really easy to sand and can take out up to 2 millimetres of discrepancy. I think I am down to less than a millimetre so this stuff might be the finish I am looking for. Then, assuming I have the level of fair I want after the microsurfacer, another coat of Penguard and a guide coat and if its all good, its ready for painting and I move on to the curved sections.

Its moving along now. And although I whinge a bit, I am actually enjoying building again. But ask me again after I get the highbuild on. I dont think I can use air or power sanders when it comes to high build stage.

Again, stay safe, especially on the roads, love your loved ones and just enjoy. Next year is going to be HUGE! 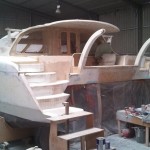