Nothing to see here

Three weeks since the last post update, and for one of those weeks I was away in Melbourne seeing my family for the first time in a long time. Also taking up time is that Jo and I are looking to finally buy a house, so we are spending a bit of time on that search, looking through homes. And for the rest of the time, I did  work a couple of days each week on the boat but the work seemed to look like nothing really was happening.

Get used to that. I say that more to myself than to the readers hoping to see progress.

Fairing is like that. You slap bog on, sand most of it off, slap some more on albeit a little less than last time, sand most of it off again and this keeps going on until the part or whole looks like it should. But the appearance changes very slowly.

That scenario will be repeat many many times in the months to come. And progress will appear to become slower as the boat gets closer to fair. For the past few weeks (and also when doing the roof repair) the change was somewhat more visible because I was actually changing the shape of the boat rather than just taking out very slight imperfections, some barely visible (until gloss paint is applied).

So this post is to show the progress albeit slight that the final reshaping of each hull to rear step side transition has taken over the past 2 weeks.

As with the roof I used battens to show me the height and shape of the curve required, marked the surface with a marker to show where the gap under the batten started (or where not to add any height) and then the depth of the gap beneath the batten at various points until it came to nothing again at the other end of the span. And this happens in multiple directions across the curve not just left to right or top to bottom. 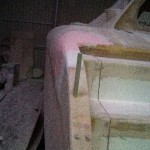 Then bog is added to build up the hollows, then sanding happens to take down the highs if possible (not possible if the glass shows through). And like with the curved roof I used different color bog via food dye to show me where each layer of filler ends. The batten is still the final arbiter but it is easier to know where different layers start and end. Without the dye it is possible you could add a layer of bog then sand it all off again, with little or no gain in aesthetic. (at the end of the day that’s all we are doing here now, making it look like we want). 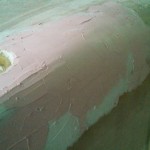 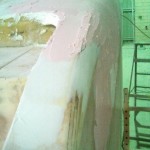 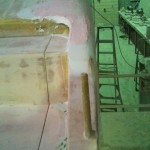 The deepest that the hollow needed to be filled to make the transition from curved deck to step side top was about 5mm – 10mm. Its still deep for bog, but nowhere near the 25mm I needed to fill on the roof. With each application I was adding about 2mm to 3mm of bog, then sanding about half off again. And often with such curves it seems like each fill will be all that is needed only to find when it sets and sanded another layer is needed. Each patch smaller than the one before. 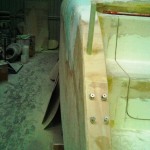 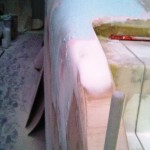 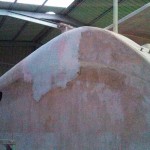 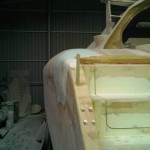 Most of the bulk that needed to be added was height into the curve from flat top of step side to the top of the curve, in other words when the batten was curved from the flat section of the step side to about where the deck reaches its full height and starts to run flat the curve that existed was lower than the batten indicated a fair curve should look like. But you cant just add height to the horizontal part of the curve without the batten telling you that you have changed the shape of the vertical curve around the hull side (which is relatively flat) to the flat deck top. So as mentioned a line marks the shape of the bog patch and a number tells me the depth, of course the number is zero at the edge of the patch all around but it is not necessarily an even transition across from one side to the other, there are hill peaks that require less bog than the valleys until eventually all of the curve is the correct height and needs no further filler. (And the numbers disappear under the bog the moment I apply it so its a bit of a memory game after I first apply so that I dont pull all of the height out again when trying to trowel the shape in). 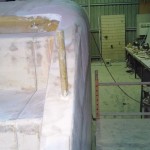 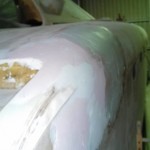 In the case of the steps it took me four bog layers to be satisfied with the shape and then a final “tight wipe” of bog to fair each section to each other. I havent applied that last tight wipe because I still have to glass the bare ply of the step sides and top, which will add about 1mm. I stopped filling leaving a valley where the glass will be so that when I add bog it should already be about the same height. Bog is needed over all glass to fill the weave anyway. 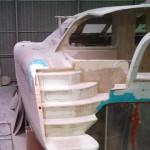 With each bog pass the shape got closer to final, I could see it start to change and it became easier to me to see without the batten, highs and lows, and to be sure I had Terry take a look each time until finally we both agreed, that I had it done (apart from the final wipe). The tight wipe of bog is not as thick as the previous fill layers and as a result is also easier to get fair in the wipe itself. Sanding is always going to be needed, but with a thick layer of bog used for shaping, its difficult to pull that bog with a tight shaped screed, because the bog moves under the surface and pulls a wake with it which alters the shape. Often some of the filling required on the next run is the result of pulling the shape too much on the last. 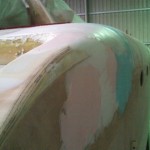 As you might have noted from the series of pics, the change each time is subtle. And you have to look at the area from many angles, it looks just fine from one angle then you can clearly see a high or a low from another, each time noting it, filling it, then rechecking. But each time it does look closer. At least with your eyes in the real, sometimes pictures cant capture what the eye can see.

And the blue bog layer I slipped and used a bit too much dye. I am pretty happy with the shape it has become. It looks pleasing from every angle. The long shot on the port side gives the impression a hollow is still there, but it seems to be an optical illusion created by the camera because on closer inspection (especially with a batten) there is no hollow there. 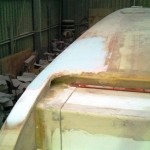 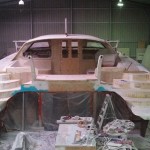 And while all of that shaping was happening I was also final shaping the curved lines of the transition around the middle step around to the back of the bath wall, under the davit. This curve is like an “S”, convex at each side (the step and the back panel) and concave under the davit. And transitioning from 90 degrees of the step front to about 75 degrees at the bath wall. 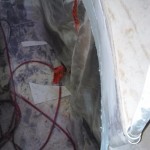 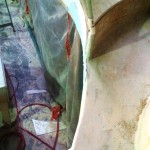 Oh and it only seems a couple of posts ago I was complaining how hot it was. Its cold now. Damn cold. Sanding is a great way to keep warm. (Bog takes 2 days to go off but sanding in the cold is much easier than the heat).