Major moment. I got a glimpse of how the boat could look (in just a few short months). The hull sides are now one color. Although the photos dont show it so much, its not white, its a light grey, but its uniform color and replaces the multicolored hull sides that made it difficult to gauge how close to fair the boat looked. (Look at the contrast between painted and unpainted in some of the pics).

Its one of those moments I have waited for for months and years. Months as I sanded and sanded and sanded and years as I watched boat after boat get painted and launch. So here I finally am, at the final stage but one, that one being bolting everything on once its shiny. Unfortunately this stage takes a number of coats each with a full sand in between. Hopefully, just the one coat of the stuff we put on today and only one or 2 of the sealing highbuild (I am using Jotun Penguard) and we spray the glossy paint on.

Heads up, there are gonna be a lot of photos in this post, some not different enough from others to really warrant it.

Today Terry came over and we rolled on the International Microsurfacer onto both hulls and the bow D section underside of the bridgedeck. I still have the inside hulls at the stern and the back panel and the entire cockpit to do. I wont need to do the decks, proceeding directly to the Penguard Highbuild to seal them under the non slip paint so I have no need for them to be perfectly fair.

I think I still have just enough to finish the stern and cockpit. I got an 18.6 litre kit (16 litre paint, 2.6 litre hardener at 6:1), and thought it might do the whole boat but had no idea just how thick this stuff is. This picture does not really show how thick. It is definitely the thickest stuff I have ever used. 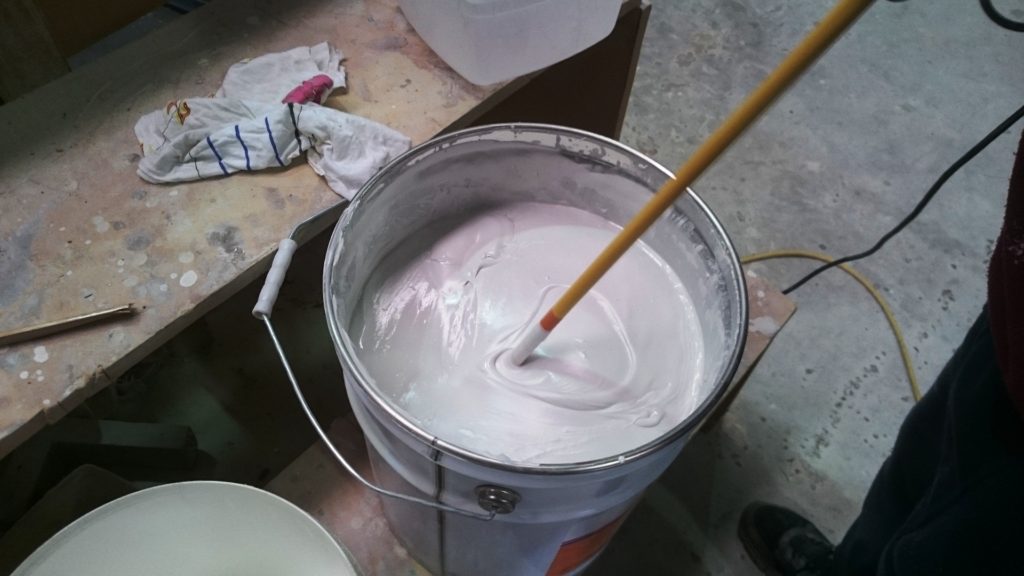 We rolled it on. I cant believe its possible to get something as thick and gloppy as this stuff through a spray gun. Rolling on leaves a texture that will get sanded off, but it adds a layer of sanding before you get to fairing, but because its soft it shouldnt add too much extra work. It got Terry and I thinking about the most wasteful method, spraying or rolling. With spraying you get overspray floating around the shed and landing on stuff you didnt intend it to, although having said that, again I cant imagine this stuff floating its so thick. With rolling you get the peaks of the stipple that are a waste and will get sanded down to the lower level. Which would use less paint?

We started at the inside bow section then did the port hull then the starboard. Each section used roughly the same amount of paint, just over a quarter of the entire kit, so about 5 litres per section leaving me about 4 litres to do the cockpit and rear panel and maybe the steps if it stretches. I am only really wanting to cover areas that will be glossed, so the step tops, seat tops and cockpit floor wont be covered, they will get some seal coat then cork.

So without waffling on any further, here are the pics. I think its stunning. The chine looks pretty good, the flat panels look flat (even though they curve fore to aft) and the strip planked hull to deck curve looks fair. The noses look fantastic. Even the cleat pads look nicely shaped now. Some pics show the roller marks, however if roller marks are my biggest problems then I am nearly finished. Hopefully the boat still looks this monotone once I sand it back again. 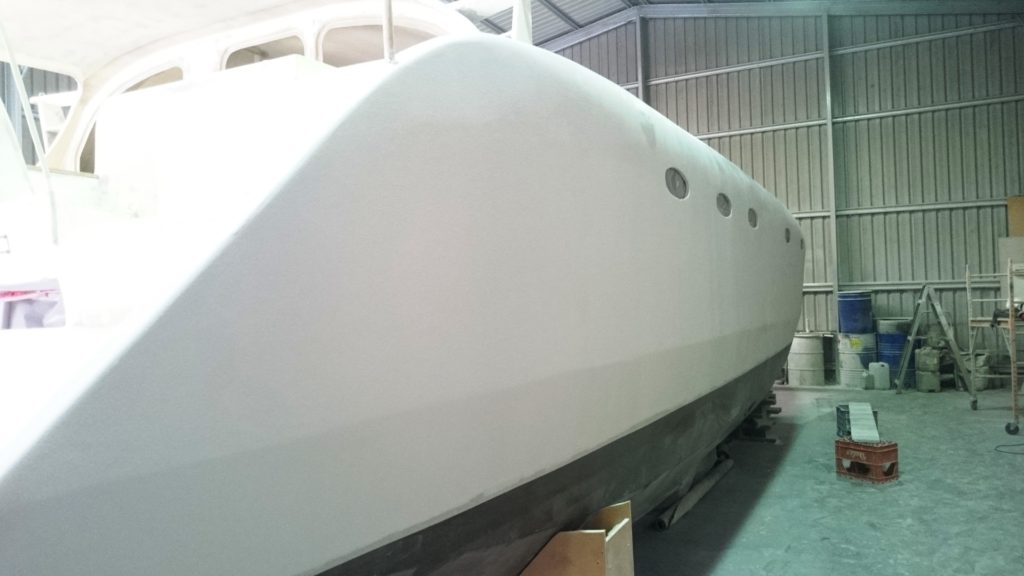 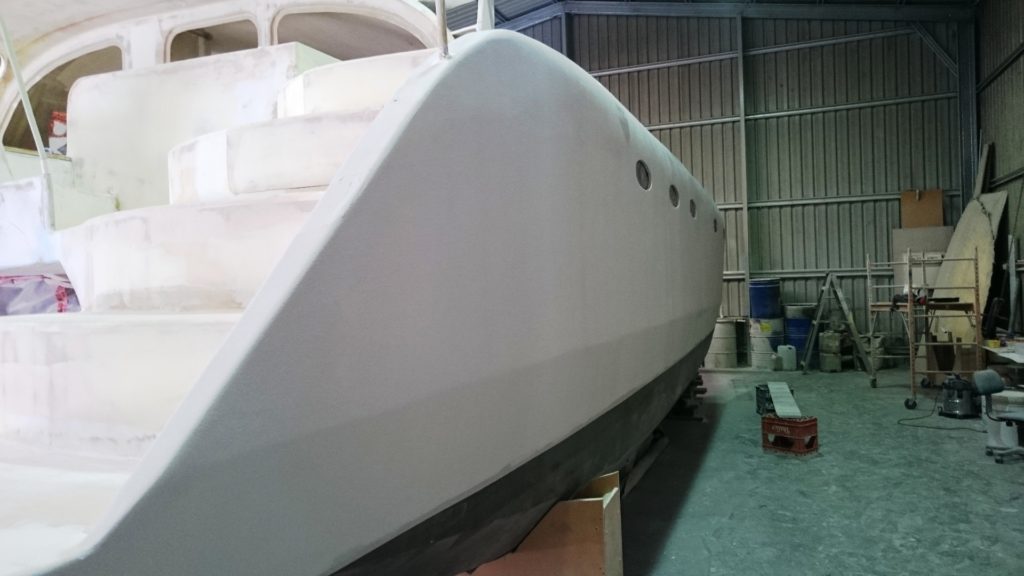 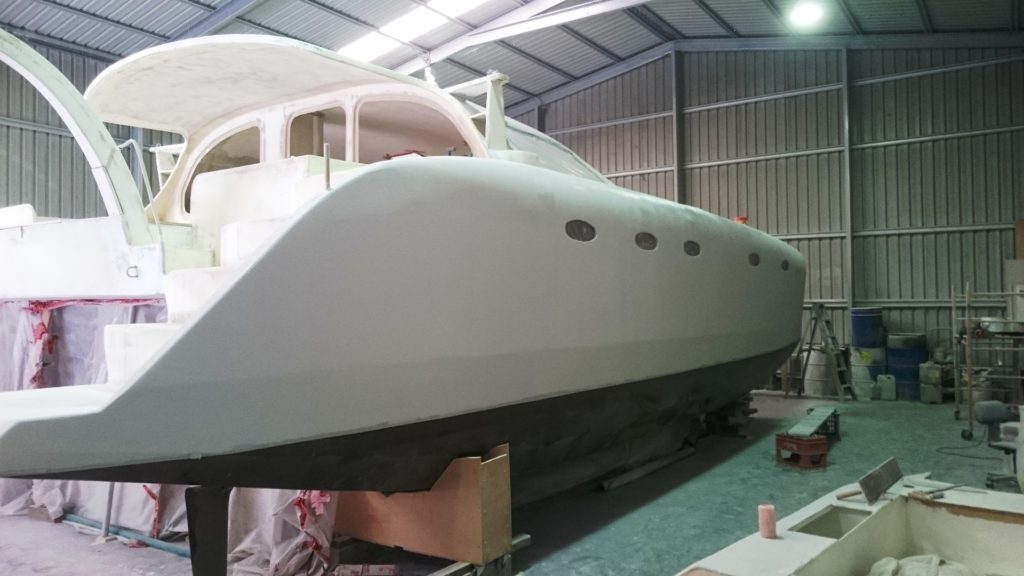 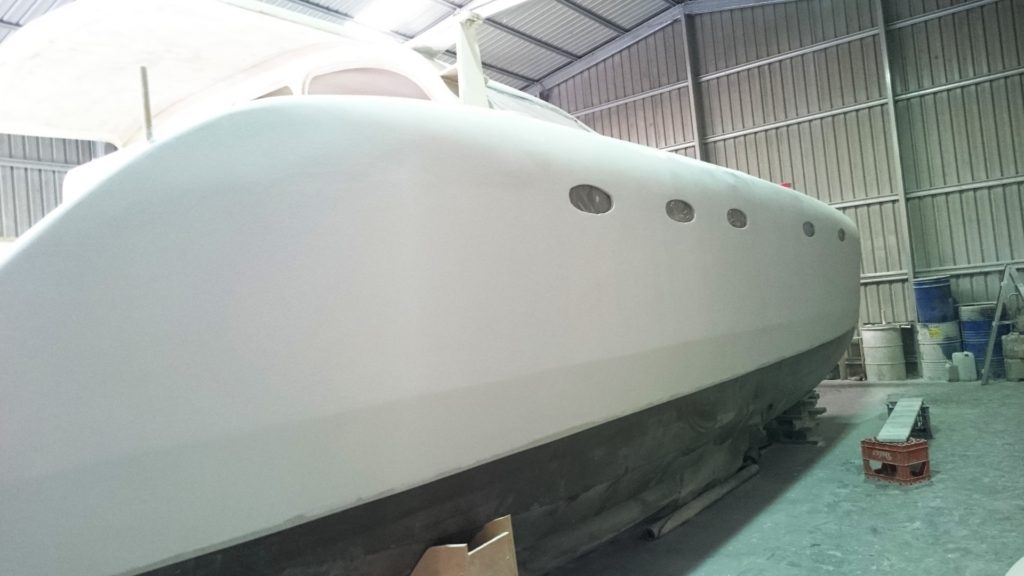 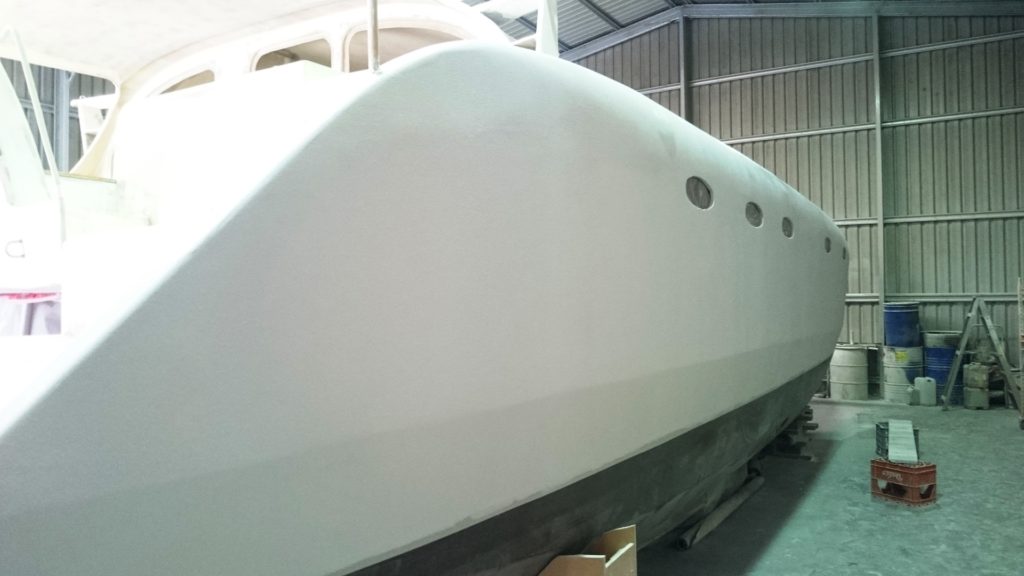 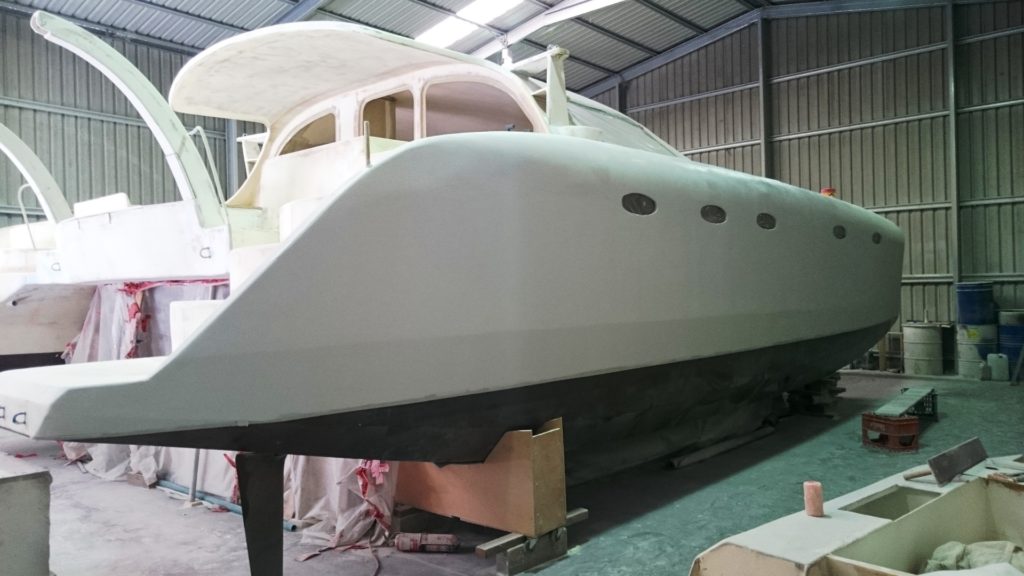 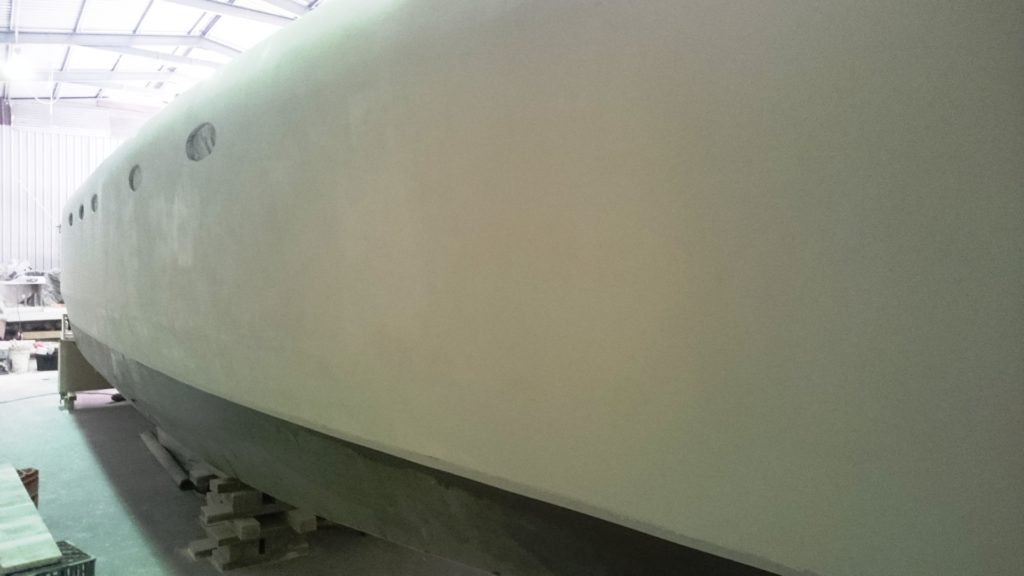 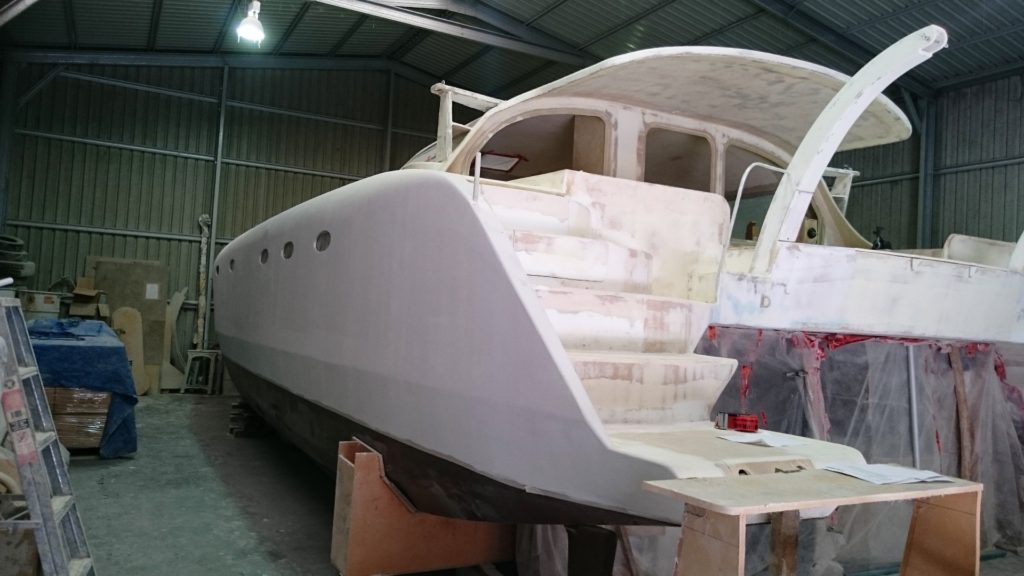 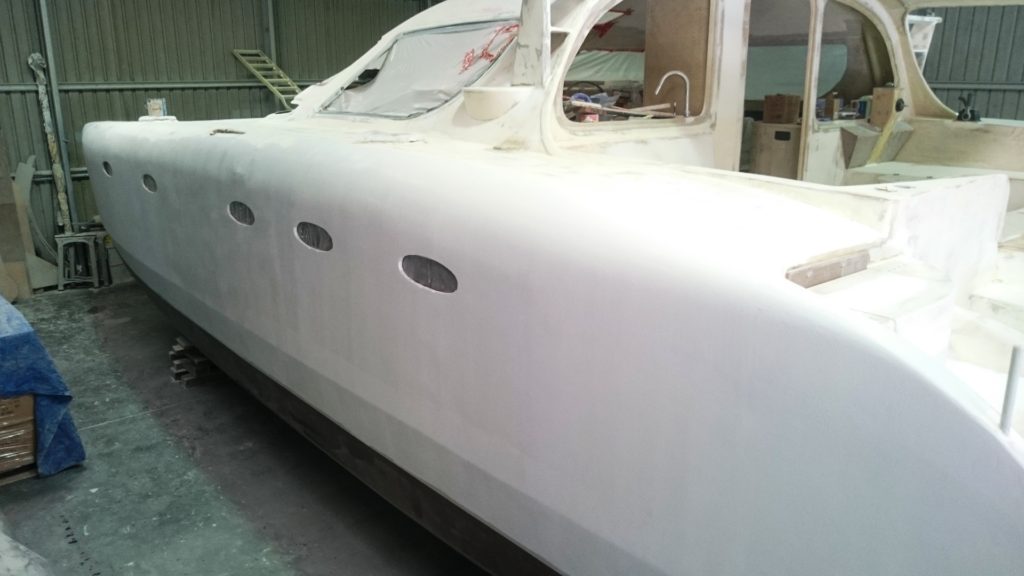 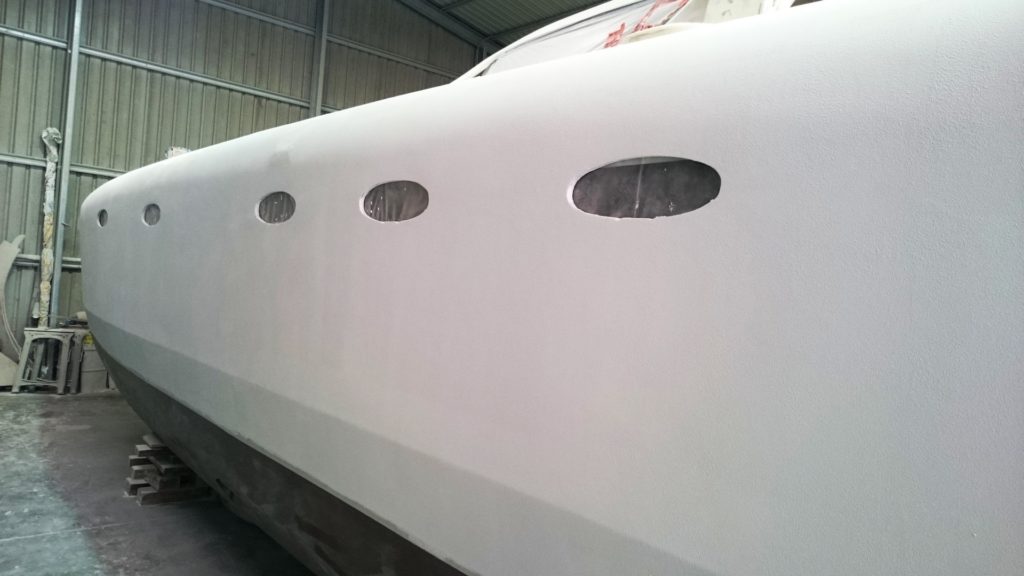 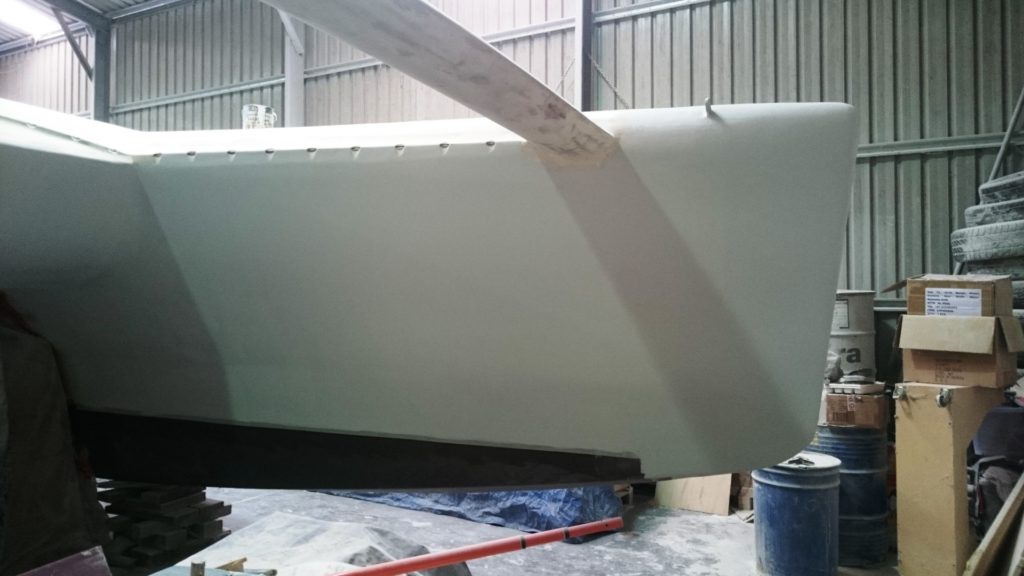 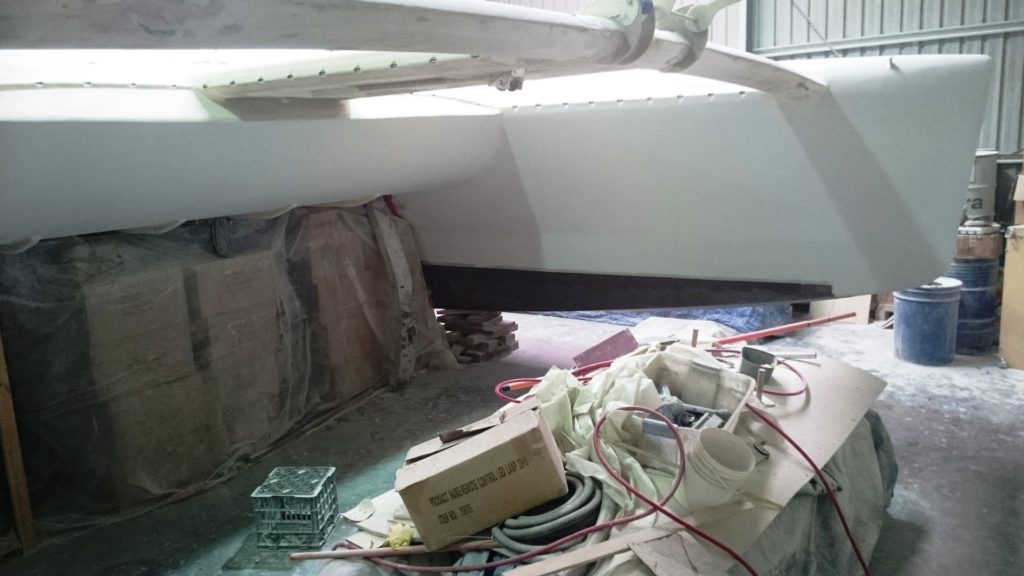 I also fixed the first exit hole I made for the port steering ram over run and made the correct position hole for each hull. I cut the hole and glassed conduit in. I will trim them, plug them with a ply end and then a conduit plug end over it. The ply is to hold a t nut so that I can screw a pad eye into each side to be a tie off point for the dingy, actually my idea is to have a carabiner on the end of the painter (fancy name for dingy rope) and just motor up and clip onto the pad eye. 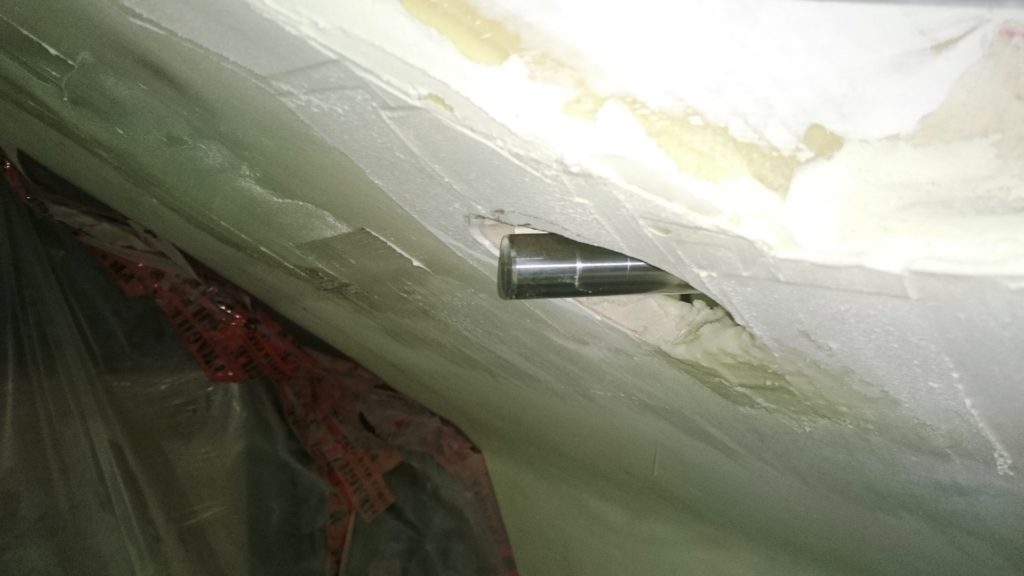 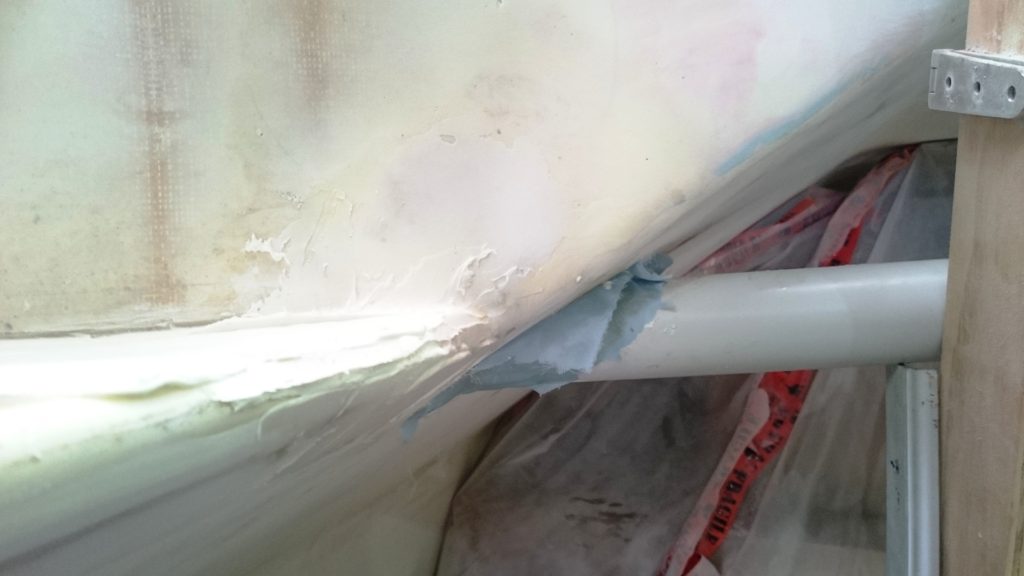 Once I have faired all of that out again I will be ready to do the rear section in highbuild, I also still have some sanding to do in the cockpit so that too must be completed before the highbuild goes in there.

Jo and I went to Nelson Bay, Port Stephens last weekend. We intend to spend a lot of time cruising Yikes there, at least until its a sail boat and we are comfortable enough to venture further. While there we saw a Schionning Cosmos 13 meter that had the paint job we now want. (Hopefully the owner doesnt mind me using a photo of their boat, which is for sale if anyone is interested, for $495K). 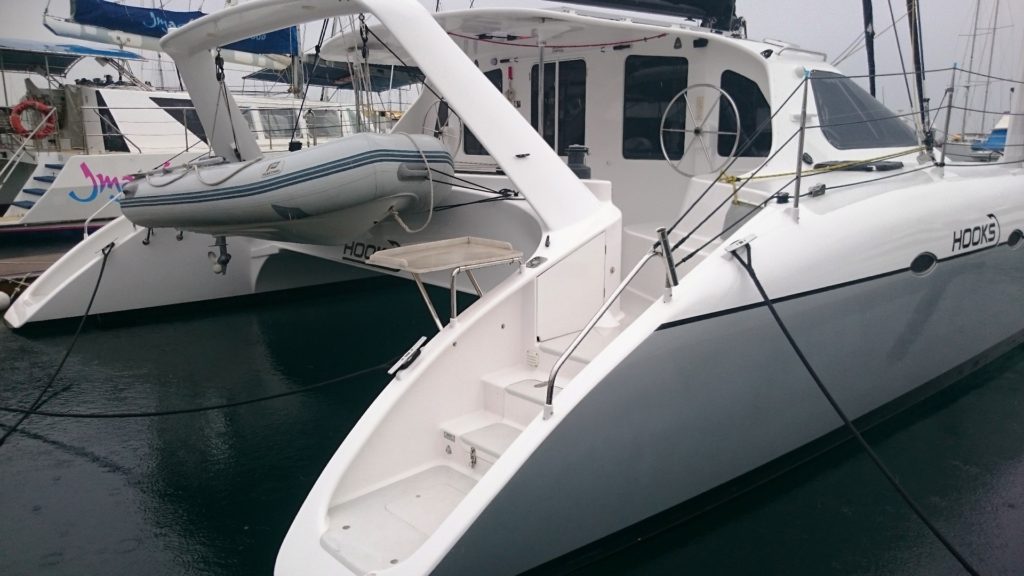 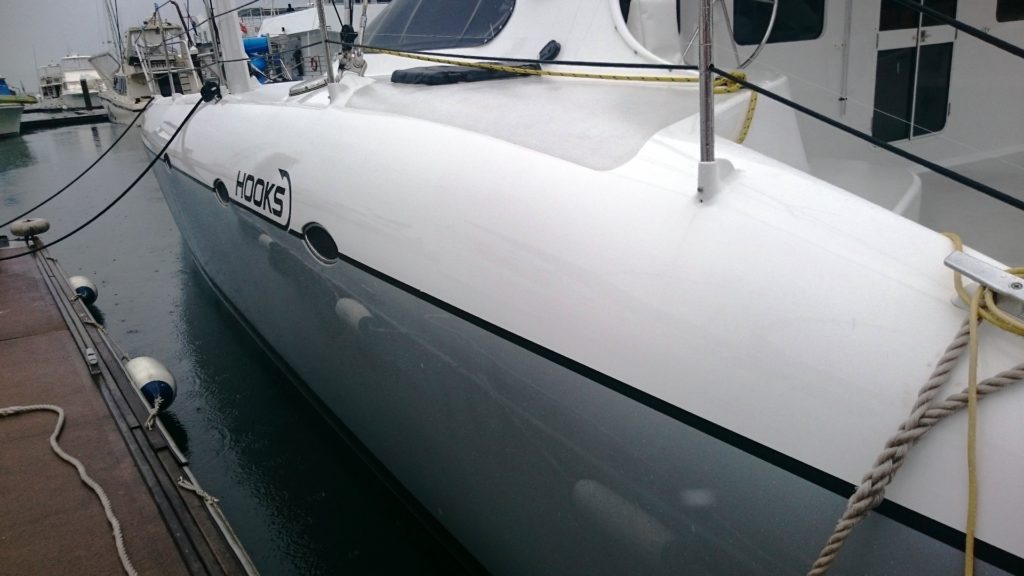 We will have a black stripe through our portlight line, white above, silver below, and a slight grey tinge to the non slip. Black stanchions and life lines (and masts and lazy jack sail bags). I intend to put another coat of copper epoxy with black pigment, so black antifoul will finish it off.

The microsurfacer needs a couple of days to go off. Hopefully next week I will get a bit of sanding started before Jo and I go on holidays for a week to celebrate our 10th wedding anniversary.

Thanks to everyone for your support over the years and for your emails, keep them coming.