Some builders tell me that fairing is often only finished when you can convince yourself it is. As difficult and tiring as fairing is, believe it or not, its addictive and good enough is never good enough.

Buoyed by my success (yeah I’m claiming it) in repairing the roof so far, I have decided good enough isnt good enough. Oh, and thanks for all of the messages of support I have been getting, it helps a lot.

After repairing the hollow corners (they are round, but they are the point where the front of the cabin across the boat turns around to become the sides of the cabin so I call them corners) it left the boat with slight highs on those corners so that across the front of the boat there is a now a slight hollow. Its only visible when I run a batten across the front but I knew it would be there. In fact I used a picture of the same angle as the last posts feature pic to show how imperceptible the hollow was. In the last post the area is not filled in todays it is and you can barely tell the difference between them unless someone ran a batten across.  But you cant add about 20mm of height on each side without it creating a valley in between, and knowing it was there bothered me. So I ran the batten and decided that the gap was going to be easy enough to fill, not use too much filler (I would be filling some of the gap with polycore), and would be very satisfying to know I had gone all the way with fixing the roof, and not bailed 80 per cent of the  way through.

When the batten is run across the middle of the front of the space, above the windows but below the hatches the gap is about 15mm deep starting at nothing each side and descending to that much for about 1500mm before angling back up on the other side. The 2 hatches breaks the space up and draws the eye away from that area which is why the hollow is so difficult to detect without the batten, but I figured I could fill the space below the hatches down to the windows and between the hatches to about half way up and that would feather out to the front of the first solar panel pad and that would do it. The roof will be the correct shape again, albeit 100mm taller at the front than it would be if made to spec, but I am very happy with how it looks now and how well it works both internally (the added head room standing at the fridge top bench works well and the room looks much bigger than it otherwise would) and externally (the flat level roof fits the solar array perfectly), so other than about 20kgs of additional weight, alls well that ends well.

First pics are of the space between the hatches and window tops with polycore in place, then close ups of the polycore.

I had also pre marked some very shallow hollows I had decided to give another run of filler to, about 1mm deep. I wet out the polycore and the roof where it would sit and went to work filling the other areas whilst it tacked off. When it was tacky I pressed the polycore into place where the tacky resin acted like contact and then set about covering it all with bog.

The bog will take a couple of days to set hard enough to sand (I have slow hardener because in summer normal or fast hardener go off too fast, in the pot on some days) so tomorrow I plan to cove all of the edges of the hatches and solar panel pads and clean up the window frames. Then the new filled area will no doubt need a second fill run but soon after that I will be doing final spot filling ready for high build. Much of the roof will be covered with the solar panels, and I dont plan on being as fussy under the panels. And on the space along the sides of the roof (the highly curved sections in the next pics) I intend to put non slip because there will be a tendency to try to avoid walking on the solar panels and if not non slipped, that curved roof will be quite slippery when wet. So that means a lot of the roof will be covered with something so the fairing of a lot of the roof will not need to be as good as the rest of the boat. 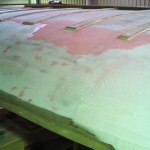 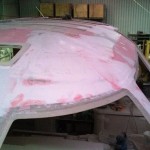 After the roof top is ready for high build, next step before the highbuild will be to prepare the window pillars and roof beam for highbuild also, and the roof overhang edges will also need some fairing done. I cant wait to get the highbuild on though, because it will give the first glimpse of what the boat or at least the roof, will look painted. Exciting.