The windows are in and sealed and went fairly smoothly. Thanks to the fact they were well formed to shape and to Terry. Fitting the larger windows is definitely not a one man job. And the black goop used to seal/adhere the windows finds a way to stick to anything it touches and many it can’t have and to find its way everywhere it isn’t meant to be, if you are as clumsy as me and attempt solo fitting. I did a couple of the smaller ones solo and it was more difficult than it needed to be with help. But in the end they all went in, smudges were cleaned and wastage was minimal. Just as well, I needed 25 tubes in all @$17 a pop!

The method is simple enough. After masking the edge of the boat where I didn’t want the goop to go beyond, dry fit to ensure uniform (and sufficient) gap all around. The factory cut the windows exactly to my templates and here and there a further trim with an angle grinder, usually on a corner radius, was required. The windows required 2 screws to act as a table to keep the window at the correct height, with width spacing gravity isn’t messing with you. Also whilst in place run a Stanley knife around the inside edge to back peel the protective layer. Re check sizing and if ok, key both Perspex and flange, clean off with mentholated spirits and apply the double sided 5mm high tape to the inside edge all around. Then usually Terry would apply a thick bead of Fixtech 200 to the boat whilst I put a thin smear all over exposed Perspex edge. Then we both lift it into position trying desperately not to get goop everywhere and once successfully in place pull it down tight with screw tabs (a screw through a ply tab screwed beside edge of panel). The excess would squeeze out the front, stopped at the back/inside by the tape dam. Back fill where more was required and cove and clean leaving just the small areas under tabs to fix later. Done, leave it to set for a few weeks. Then remove tabs, back fill and cove with goop and back fill screw holes with resin on the inside. I left the tarps on while it cured to minimise the daily movement. 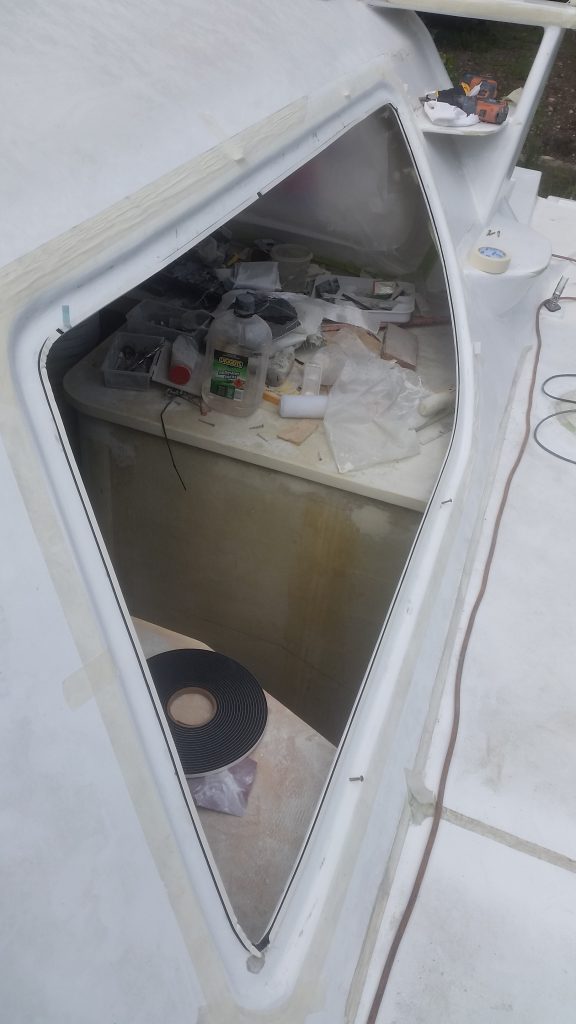 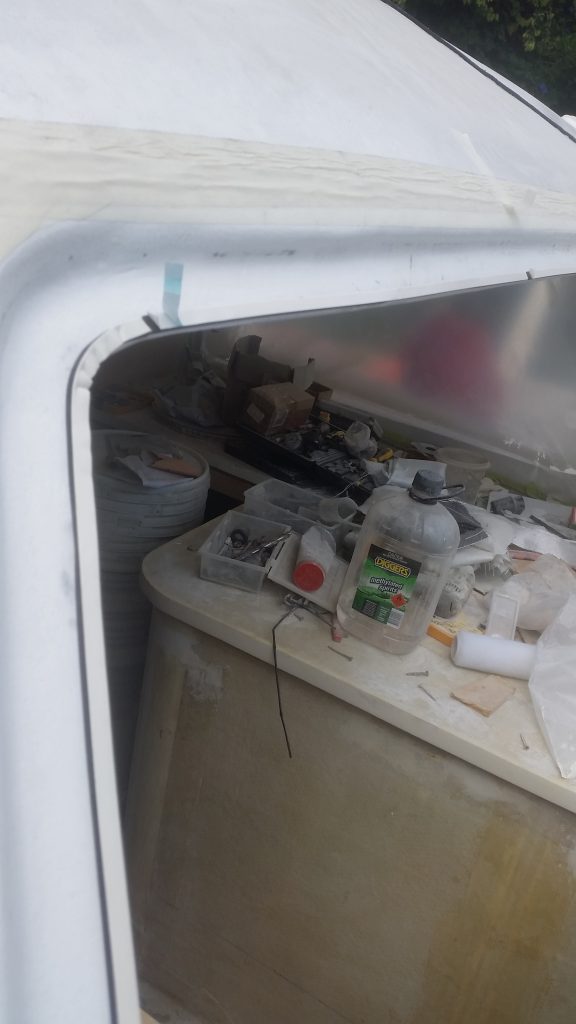 An interesting thing happened on one of them. During dry fit we trimmed so as to have a 25mm gap all around. The gap is to allow the windows to expand in the heat then contract again as they cool overnight. We went through the above process and I smeared my exposed edge in the blazing sun. We carefully put it in position with a 20mm gap along one edge and the gap on the other side was down to 5mm. It could not have been more than 10 minutes and the window had expanded 10mm. We lifted it off, which took some effort because of the double sided tape and the vacuum effect of the thick glue, re-centred it and hoped that was the limits of the expansion. It seems to be fine but goes to show how fast the expansion can occur. And it took a moment for the reason to dawn on us, we even contemplated cleaning the goop off and trimming more. In retrospect that would have been a mistake as they would then have been too small with less adhesive surface area. 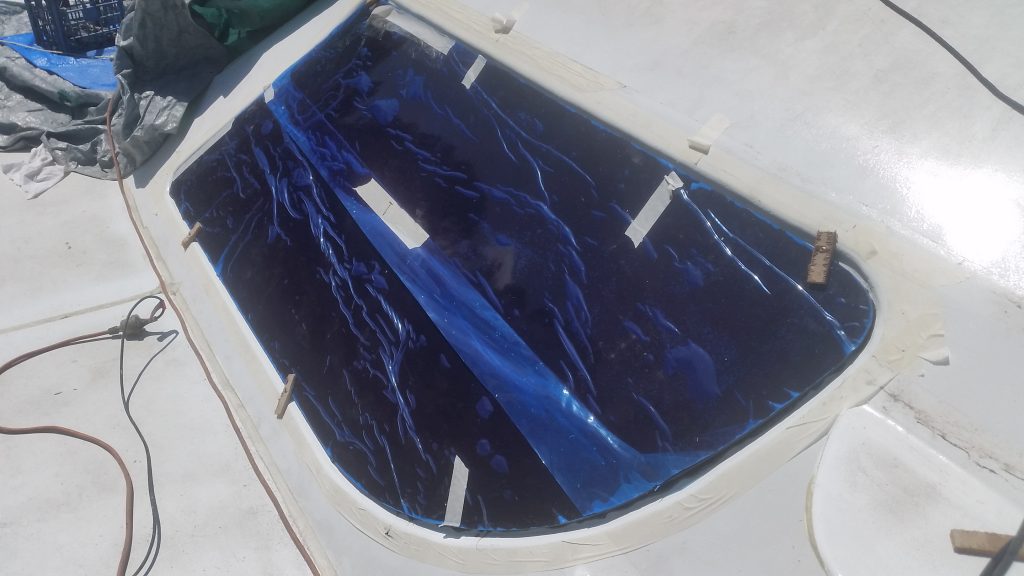 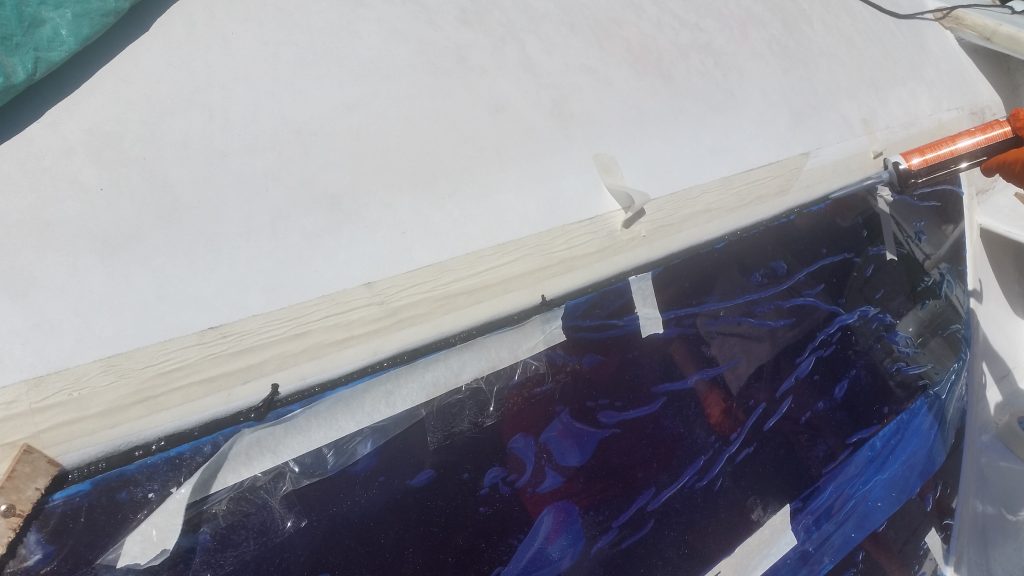 I have also cut and fitted my main bulkhead windows including the doors. With enough clear Perspex left to make the shower door. The opening method I settled on was sliding windows on tracks and pelmut made from clear Perspex and with push down spring loaded lock pins. 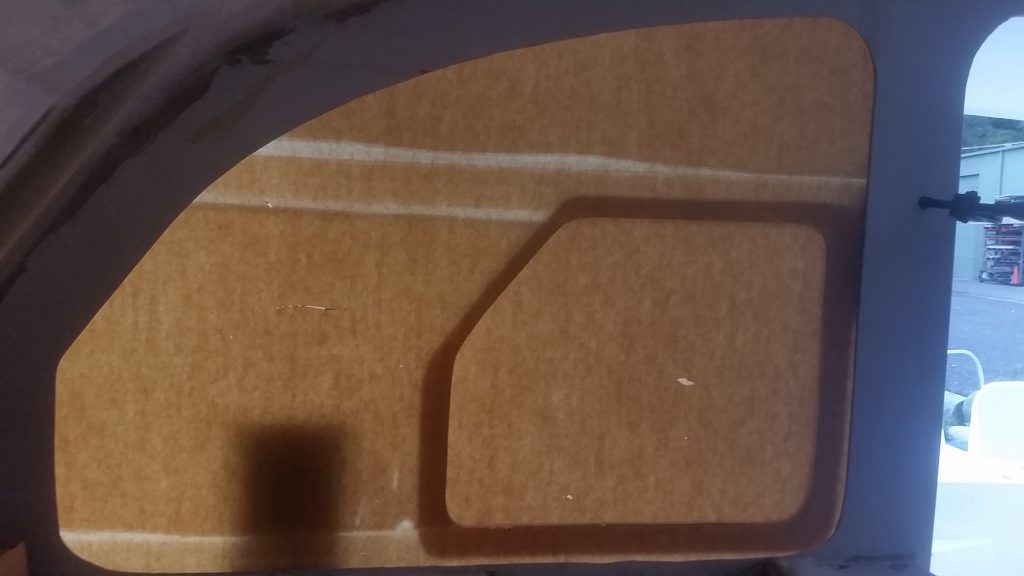 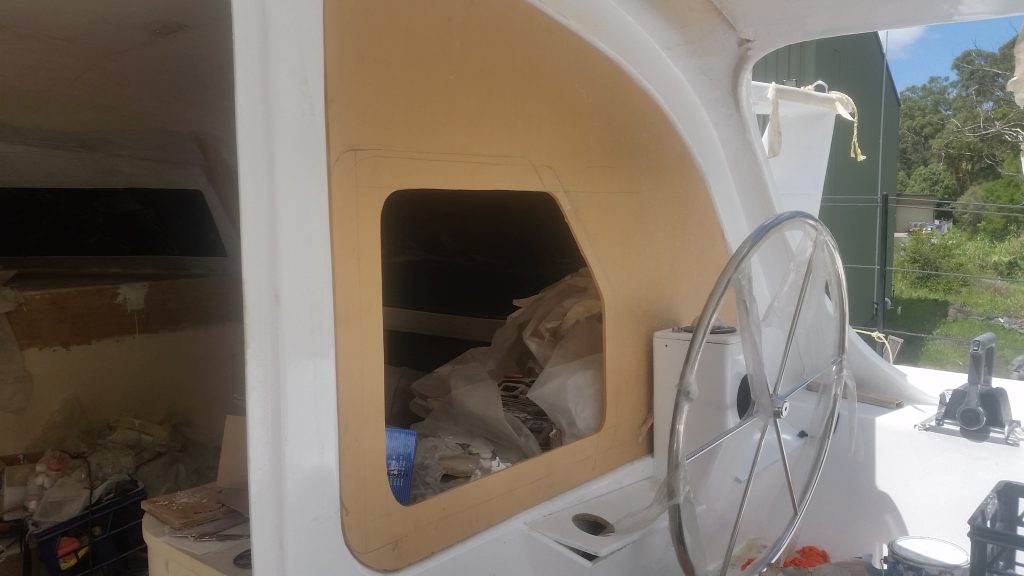 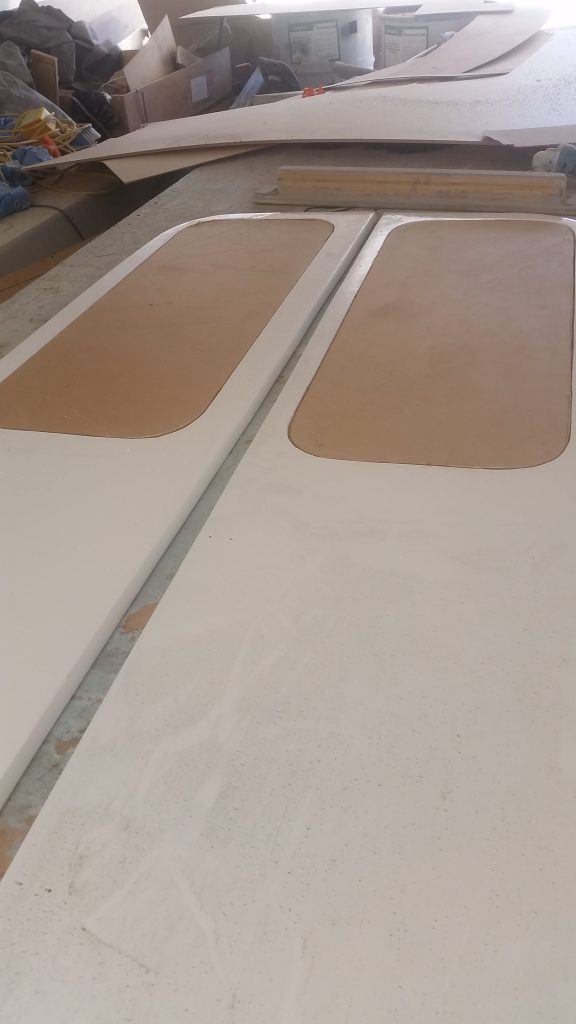 With the windows in and curing I fitted the hydraulic lines including a type 1 pump for an autopilot (I have all the parts for an autopilot now but may not have it all installed before launch). The pump is in line so to avoid having to re-bleed the system to insert the autopilot I have plumbed it in now. The outboard mechanic is going to help me bleed the oil in as we fit the outboards which are the last “must do” task left to do tasks before launch, the rest on my ever growing list are nice to have done but not launch critical.

For example I have applied all 3 tins of kiwigrip non slip but ran out before I did any of the roof, nor will I have the solar panels in before launch. And many other systems. None stop me from dunking this thing.

If I hadn’t mentioned it, the truck is booked so the clock is ticking. Loudly. I won’t mention when. But not long after you will know. Unless it sinks. Not sure I would blog that! Not for a while anyway. In the meantime having completed all of the big jobs I continue to work on the millions of small ones. I had a habit during the build of leaving jobs to start on something else then either forgetting to finish them off or thinking the finish of that task is small so I will “get around tuit”. Now is that time.

The outboard mechanic has the motors in and the controls connected. They go through the starboard rear bunk, the only one so far with a mattress in (not the final mattress, just a double camping foam one we happened to have, so I will need to encapsulate all of those dangling control cables. So another job on the internal fit out list will be to build a box around them to hide them.

Thanks so much for hanging in with me for so long, its soon now I promise. Although, I have been known to say that before a number of times.

4 thoughts on “Almost there”